Boxing is sometimes called “the noble art”, although I’ve never quite been sure how “noble” it is to beat someone to a bloody pulp. Happily, boxing sims let you work out all of your primal rage without actually smashing someone in the face or breaking your hand, and in the case of The Boxing Zoo, you can smash up your opponent pretty good without even breaking a nail.

Forget about facing down Manny Pacquiao or Mike Tyson, because The Boxing Zoo has you sparring with an even crazier cast of cartoon characters. Some of them are animal-like, but I’m not sure I’ve ever seen a Mexican wrestler kept in a zoo, although I don’t think I’ve ever seen a luchador boxing either, for that matter. In any case, they’re the lean and mean side of cute and cuddly, and they’re not about to pull any punches. 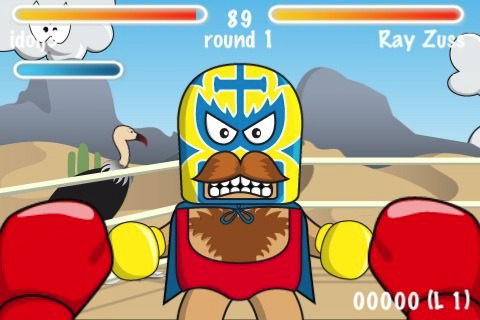 In the ring, you are represented by a pair of floating boxing gloves while you face your opponent. You must keep your fingers on the gloves at all times, either holding them up to protect yourself or quickly swiping to punch. There are also two meters to keep an eye on during a match: vitality and health. Health is self-explanatory, but your vitality meter goes down by half every time you punch. It will recharge after a second or so, but you can only really get off two punches at a time, so you have to plan accordingly and keep an eye out for openings.

Rounds last 90 seconds, unless of course you can get a knockout. There are no one-hit KOs, but get in enough shots and you will start to see some serious battle damage.

The game looks great, with bold graphic design and memorable characters, but gameplay is worse than Mike Tyson’s face tattoo. Trying to hold the phone while keeping your fingers in the gloves and quickly swiping to punch is just an expensive accident waiting to happen. I didn’t drop my phone, but it was easy to see how this experience could have ended in tears.

The awkward control scheme is also seriously compounded by the lousy control sensitivity. You must swipe repeatedly before a punch will even register, adding to the general frustration. Placing the phone on a flat surface makes things a little better, but not much, as my gloves were constantly drifting off to the side, despite my best efforts to keep them in place. It was impossible to gauge my opponent’s difficulty when I was already plagued by so many technical issues.

Because it has a ton of style and the potential to be more interesting than the usual tap ’em games, I really wanted to the like the game, but the controls fall painfully short and will need a lot more fine tuning before The Boxing Zoo can be a contender.

This 3rd Party App is available at the Apple iTunes AppStore. Browse the full list of all AppStore apps filed under the AppStore category.
Download The Boxing Zoo at iTunes App Store
Price: $1.99
Developer: Website
AppSafari review of The Boxing Zoo was written by Tracy Yonemoto on May 21st, 2010 and categorized under Action, App Store, Games, Sports. Page viewed 5308 times, 2 so far today. Need help on using these apps? Please read the Help Page.