Finding a tennis partner can be a daunting task so why not try it online? If you’re a tennis fan and are into watching tennis (French Open, US open, Wimbledon) on TV you’ll love playing this game on your iPad against other fans. Ace Tennis 2010 HD Online has been developed by iFoneKit and fully optimized for the iPad. You can not only play the game against the computer, but you can also play live with other people from around the world.

Ace Tennis on the iPad starts with a nice video demo and shows off its sharp graphics right from the start. There is some catchy background music as well as lively sound effects during gameplay for added intensity. Give your player a name, pick your player’s sex and their nation by flag. You can even upload a picture from your Photo Albums that gets uploaded to and used in your profile. During online game action you can chat with your opponent which isn’t exactly practical really except for maybe before the game starts.

Controls in Ace Tennis HD for iPad uses simple screen taps to move the player towards the ball, at which point he/she hits the tennis ball, so you don’t really have to hit the ball. Just hold the iPad in landscape mode with two hands, and leave your thumbs free for tapping. Long games can be straining as you hold the heavy iPad for long periods of time. You do have the ability to influence the style of your hit using tilt controls provided in the game. You can walk through a brief tutorial to get the feel for the tilt controls in a demo match. Basically you hold the iPad in both hands and tilt it left and right to make a left or right angled shot. Tilt the iPad forward to play a dropped short ball, and tilt it vertically to play a lob. Serving the ball takes two taps, one to toss it up, another to hit it. You can use the tilt controls here too for added complexity.

The game can be played on either grass (Hard), sand (Normal) or indoor (Easy) and you can pick from 4 different players, 2 male and 2 female, each with their own level of skills in forehand, backhand, speed and serving. The colors and graphics in the game are pretty amazing. Playing the game on the iPad feels normal with the large screen and it’s not awkward and crammed like iPhone tennis games can be. 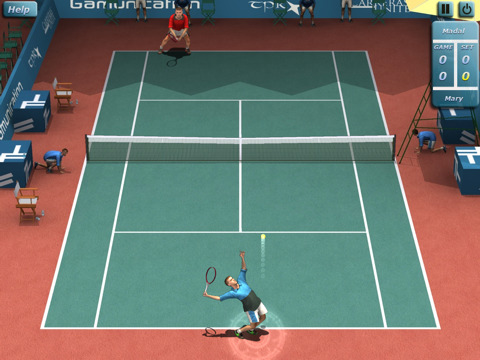 You can play tournaments against a set of computer players or live online with other game owners, and this is where Ace Tennis 2010 HD’s strength lies. Multiplayer mode lets you either find a player using the game’s Match-Making mode, or by choosing a Table. Both will find you a player to go against in no time, as there doesn’t seem to be a huge lack of people who have bought the game and are looking for playing partners. When the game can’t find a partner for you, its notifies you that there isn’t anyone to play with. What’s cool though is that you can play vs. the computer and when someone becomes available you’ll get a notification. You can view the other players profile, send text chats back and forth if you like, and add them to your friends list. You can see the connection speed of other players in milliseconds. Be wary of playing people with slow connections since you’ll feel like you’re playing in the Matrix at times with delayed reactions from your opponent coming over the network. What could perhaps make the game a bit more exciting, would be live audio commentary and some variety in the background music. Single players games are saved when you close the app which is nice. iPod music support is also missing in the game.

For what you get with $5, Ace Tennis 2010 HD Online is a great iPad game for Tennis fans worth looking at if you are in the market for some digital tennis action.