Castle defense and catapults go together like chocolate cake and milk. It’s just a classic combination that’s made sense since the Middle Ages. When you throw in stupid monsters, buckets of blood, and an iPhone into the mix, you end up with a surprisingly fun game.

The goal in Kill Kill Monster Campaign is about what it sounds like. You have a catapult and you want to kill the monsters. To do that, you must carefully aim your catapult with the touch screen and fire. It’ll take a second before your boulder hits, so you want to time your shots with the speed of the approaching monsters.

It’s not an easy game, and it takes a bit of practice before you really get the hang of things, but as you kill monsters, you gain experience that you can use to purchase upgrades to your catapult. This means better rocks, like a volley shot or smaller rocks for faster loading, all of which mean more efficient splattering of monster guts.

The graphics, while not especially inspired, are certainly adequate, but there is a wonderfully satisfying splat every time you hit a target. There is a gorily glorious amount of blood in the game, so the faint of heart should avoid. The music also didn’t impress me, but you do have the option of playing your own, which is a feature I always appreciate. 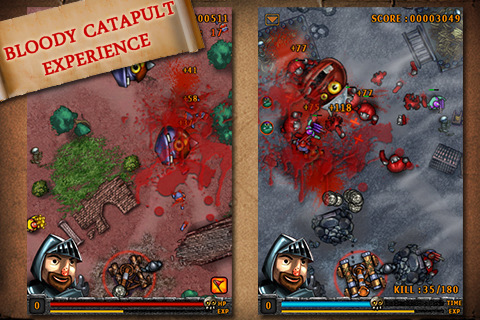 In general, the controls work very well, but there is also a ton of camera adjustment required by the game, which I found very frustrating. When the action gets hot and heavy, it is both difficult and disruptive to swing the camera around to aim at a different path. Thankfully, any catapult action is almost flawless, which is a necessity in such a fast paced game.

The OpenFeint access was a little disappointing, because although there are leaderboards for every level, there are no achievements to be earned, something we’ve come to expect in games of this nature. I did, however, appreciate the different level goals. For any given level, you might be called upon to kill a certain number of enemies, protect the villagers, or just manage to stay alive, all of which go a long way to keeping the game interesting.

It’s not a life-changing game, but it is surprisingly enjoyable. At the current price of $0.99, it’s also much cheaper than I was expecting, which makes Kill Kill Monster Campaign an affordable and wacky little game, certainly worthy of a look.