Lockout is a game app. by Parilon Ltd. that is a hybrid crossword/trivia/word game where you get hints and have to arrange letters on six separate wheels to make words. The farther along you get in the game, the more clues/words there are in each level, which makes it harder to figure out words through process of elimination. The “How to play” section says that most games (levels) are made up of nine words, though. So perhaps it just increases for the first few and then finds a steady 9-word rhythm. The objective is obviously to figure out all the words that go with the associated clues, but also to get the best time possible. The app. suggests doing a level and then handing it to a friend to see how they do because 3 scores for each “lock” are saved- “This Time,” “Best Time,” and “First Time”. I think it makes more sense to play against yourself to see where you started out, what the best you ever did was, and how you are doing now. If the clue provided and the available letters are still not sufficient enough for you to figure out the word, you can tap the “?” in the lower right hand corner for a “hint.” This hint comes in the form of moving one of the letters of the word in question into place. You can do this until you figure out the whole word if you want, but you will get a time penalty for each letter. These time penalties increase with the number of letters you request- the first one starts at 20 seconds and then each subsequent letter given is more. Also, after I completed the 2nd lock, it said that I had no time posted because my game was interrupted. I guess if you exit and resume, your time won’t be recorded.

As I was writing this, I got to lock #5, and it has 9 seven-letter words instead of 9 six-letter words. I don’t know if it goes higher than that, but at least there is some increased difficulty in terms of numbers of letters. I don’t know that the clues/words themselves get any harder over time. For example, in lock #5, one of the clues is: “Sunshine State.” I am horrible at crossword puzzles, but even I know that Florida is the right answer to that. There are also some contemporary pop-culture type of clues, like “ ‘Titanic’ actress who clinched an Oscar for ‘The Reader’.” I won’t tell you the answer to that one, but if you live in the world, you will probably know it! 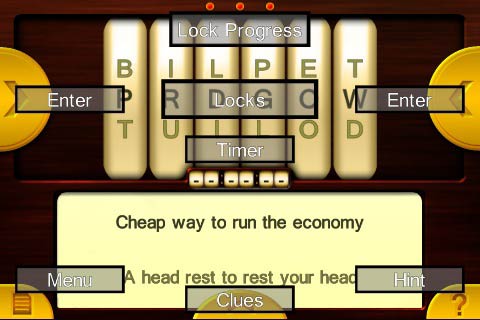 Lockout is definitely fun- a good mix of challenging and easier clues to keep you feeling good while still staying engaged. I don’t know that I’d pay $1.99 for it, though, unless I was really into figuring out words from clues. If you like crosswords, but don’t want to have to arrange words that intersect with one another, then Lockout would be right up your alley.

This 3rd Party App is available at the Apple iTunes AppStore. Browse the full list of all AppStore apps filed under the AppStore category.
Download Lockout at iTunes App Store
Price: $1.99
Developer: Website
AppSafari review of Lockout was written by Tyne Kennedy on May 26th, 2010 and categorized under App Store, Fun, Games, Puzzler. Page viewed 7213 times, 1 so far today. Need help on using these apps? Please read the Help Page.