Sometimes simple is better, and there is no better example of this than Unblock Me. There is almost no better app available to introduce a total tech newbie to the wonders of iPhone gaming. Unblock Me is clean, intuitive, and, best of all, a tremendous value.

Using the iPhone is a far more tactile experience than nearly any other gaming device out there, and few games can compare to the exceptionally smooth “feel” of Unblock Me. It is so very easy to pick up, play, put down, and then pick right back up again, and every completed level delivers that wonderfully inimitable sense of satisfaction.

The game is extremely simple: slide the blocks around until you can get the red one out. Early levels start out easy, but it quickly becomes a brain-busting challenge. You have your choice of playing in relaxed or challenge mode. There’s no difference whatsoever between the two, but challenge mode keeps track of how many moves you make and assigns you a star rating at the end based on how few you use. Instead of just solving the level, you can give yourself the additional goal of making it out in the fewest possible moves.

The free version includes an exceptionally generous 400 levels, but the full version is a scant $0.99, and it adds an additional 800 puzzles to solve and four difficulty levels. If you like puzzles, the full version is well worth it, as you’ll come to want the harder puzzles, and being able to save your stats after completing the first 400 puzzles is a nice feature, since they won’t carry over from the free version. 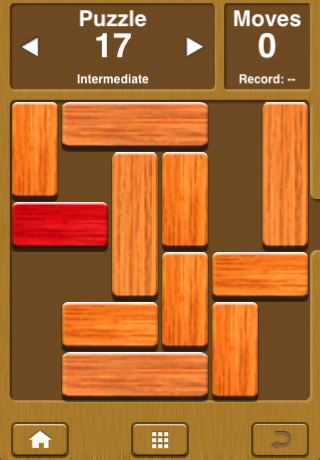 Unblock Me certainly isn’t the most innovative or dynamic game, since the physical game has been around for centuries, but it is an extremely well-executed app version. There are dozens of variations in the App Store, but you would be very hard pressed to find one that meets or surpasses the very high bar of technical excellence set by Unblock Me. Absolutely seamless touch controls and hundreds of levels represent hours upon hours of laughably inexpensive puzzling fun.

It won’t wow anyone with its technical prowess or simple design, but Unblock Me has the magical ability to challenge and entertain everybody, from your grandma to your kids. Whether you get the free or full version, if you like puzzles, you’re almost sure to get your money’s worth.

This 3rd Party App is available at the Apple iTunes AppStore. Browse the full list of all AppStore apps filed under the AppStore category.
Download Unblock Me at iTunes App Store
Price: $0.99
Developer: Website
AppSafari review of Unblock Me was written by Tracy Yonemoto on June 7th, 2010 and categorized under App Store, Board, Free, Games, Puzzler. Page viewed 7822 times, 2 so far today. Need help on using these apps? Please read the Help Page.