Educational games are a tricky lot. On the one hand, you want to give kids a leg up whenever you can, but on the other hand, educational games just aren’t very fun sometimes. Introducing very young kids to math in a fun way can be a tricky prospect, but that’s exactly what Number sense sets out to do.

Number sense gently introduces kindergarten-aged children to math through five different number-based games. All the games share similar qualities, but the games themselves are all very different. Each game sports brightly colored and attractive graphics and features a chipper child’s voice giving simple voice commands, but there is usually very little instruction in place, so experimentation is key.

Booster Balls has you tilting the iPhone from side to side to catch a specific number of falling balls to feed to a hungry alien. This was probably my least favorite, due to the awkward tilt controls and confusing instructions. The alien says “Feed me 1 to 10 numbered balls”, except the balls aren’t numbered, just counted once you catch them, and it’s impossible to feed him until you’ve collected 10 balls. Once you’ve fed him, a second alien appears and asks for 11 to 20 numbered balls, only you’re really just collecting 10 balls again; the count just starts at 11. Unless you’re playing cards, 1 shouldn’t be the same as 11.

Do The Dotty is a standard connect-the-dots game, except, like Booster Balls, each level starts off the count where the last one left off. The first picture begins 1-2-3-etc, and the second starts 11-12-13-etc. This wasn’t as frustrating as the first game, since the instructions state that you want to tap from the lowest number to the highest number, and a lot of kids are familiar with how connect-the-dot puzzles work. 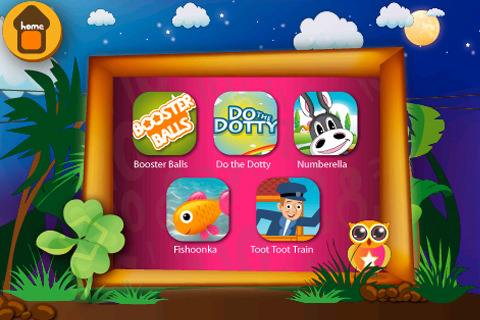 Numberella is a little more challenging, since you have a bunch of clouds with numbers on them and a voice telling you to select the highest or the lowest number. It’s useful for getting kids to think of numbers abstractly, instead of with countable groups of objects.

Fishoonka is a simple arithmetic game that introduces the concept of more than, less than, and equal to using fish. It’s a cute concept that works reasonably well, but definitely a big step up from counting balls.

The last game, Toot Toot Train, is another simple arithmetic game. The train can’t leave until it has the right number of cars attached to it, which is a good idea, but the animations involved in adding and subtracting train cars are very slow, which may cause short attention spans to wander.

Finishing each game gives you a trophy that gets displayed on a special trophy shelf accessible from the main menu, and all of the menus and controls, with the exception of Booster Balls’ terrible tilt controls, are touch-based and easy for little fingers to use. The games are a little uneven in terms of difficulty, but they’re definitely attractive and interactive enough to appeal. It’s not quite perfect, but there aren’t a lot of good math games for little ‘uns, so Number sense definitely gets an silver star for effort.