Black and white, up and down, these are the guiding principles of :Shift:, an innovative puzzle-platformer that began life as a popular Flash game from Armor Games. Now available as an app, Shift provides hours of cleverly mind-bending entertainment you can fit in your pocket.

Presented in stark black and white, the graphics are strikingly stylized and well suited to the iPhone’s small screen, while suitably accompanied by a brassy film noir soundtrack. Every level has you guiding your little man through the blank, geometric landscape to reach the exit door, the intention behind the severe contrast quickly becoming apparent the further in you go.

You actually have your choice of control scheme for the Shift mechanism, either tilting or using the onscreen button, but either one will cause the entire landscape to turn upside down. Your little man will melt into the floor and reemerge the opposite color, and what was formerly the background is now the foreground. Instead of a little black guy against a white background, you now have a little white guy against a black background. Trippy, I know.

Shifting allows you to reach places which would have been impossible before, but it does take a bit of getting used to. Early levels are fairly easy, but they quickly become more complicated, and you’ll find yourself switching back and forth multiple times, which can get confusing and even a little dizzying. Play for too long and don’t be surprised if you start feeling a little disoriented, but the levels themselves are definitely very clever in their construction. 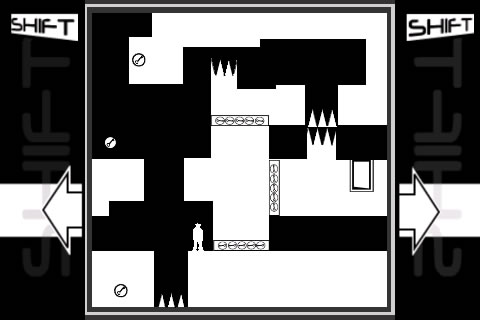 Although you are timed, for the most part, the levels themselves don’t require any rapid action, so you are free to take your time and think through your plan of action. There is also no real penalty to dying, which is helpful during levels that feature spikes that cause you to explode into a scarlet splash of pixels. With death no real obstacle, you have only the increasingly difficult and puzzling levels to unravel, many of which require you to collect keys to unlock certain obstacles that block the path to the door.

It’s definitely a game for thinkers, but like many games that rely on a single clever twist, the action can get repetitive. Thankfully, the levels are usually short, so it’s definitely a game that can be easily picked up and put down at your leisure, and there are plenty of levels to keep you occupied. There is also an online highscore board, but the replay value it gives the game is minimal at best. Loading times are also a bit on the slow side, but it’s still definitely worth a try. If you’ve played the Flash game, there’s really nothing new, but for the rest of you, :Shift: is a nicely done and affordable port of a very smart and worthwhile game.

Here is a video demo of the :Shift: app on the iPhone