I’ll be the first to admit that I’m not the biggest sudoku fan, but I know a good thing when I see it. Sudoku has become a worldwide puzzle obsession, every bit as popular and widespread as crosswords, so it’s no surprise that you could easily go broke buying up the hundreds of sudoku and sudoku-varients available in the App Store. Happily, one of the best sudoku apps out there is also one of the most affordable. Sudoku 2 provides a fantastic sudoku experience, complete with OpenFeint access and an innovative scoring system, all for free. But what if you don’t want to put up with any ads? Is the Pro version really worth it for $2.99? The short answer? Probably.

Here’s the skinny on the free version first, because it’s a really beefy free offering and definitely worth checking out before committing to a purchase. You’ve probably played sudoku, so I won’t bore you with how it works, but Sudoku 2 provides you with three difficulty levels and a beautifully smooth interface. The scoring system has a multiplier which ticks down over time, so there’s a point incentive to fill in the grid quickly and accurately. You get three strikes for filling in the wrong number, but there is a handy notation system in place to help you keep everything straight. Gorgeous animations, light-up numbers, and your choice of design layouts round everything out, but don’t forget about the OpenFeint scoreboards and game stat tracking. It’s a pretty fantastic deal if you can handle the little ad that runs along the bottom. 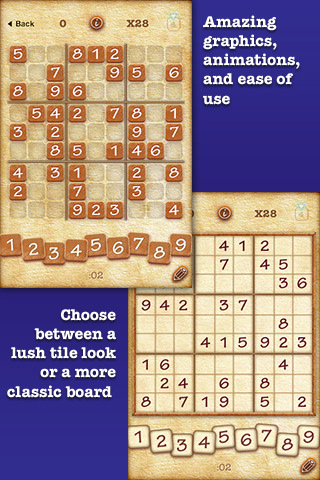 So why bother with the Pro version? Well, freedom from ads is actually a pretty significant gain, since the ad placement in the free version is a little irritating, as it is perilously close to the game controls, but there are a few other features that make this a worthwhile purchase for the dedicated sudoku player. The one I loved best was the auto-delete feature for solved notes: solve a number, and all the notes in that row and column will adjust accordingly. It’s just a little time-saver, but it’s remarkable what a super-convenient feature it is to have. Matching notes are also highlighted, and you can hide the timer in case you’re more in the mood for a relaxed game. The Pro version also gives you an extra design layout and two more difficulty levels, including an expert mode that is a major plus for you sudoku veterans out there.

The Pro version doesn’t offer a whole lot more than the surprisingly fabulous free version, but it takes a beautifully performing game and dresses it up with all the little extras that take the app from great to near perfect. It is just a sudoku app, but Sudoku 2 Pro takes a simple concept and executes it just about flawlessly. Sudoku 2 is really impressive and blew away all of my expectations, making it perfect for the casual player, but if you consider yourself a sudoku fan, Sudoku 2 Pro takes a good thing and makes it that much better. Do yourself a favor and try Sudoku 2, but don’t be surprised if you get sucked in and end up with Sudoku 2 Pro instead.

Sample the lite version of Sudoku 2 Pro on your iPhone for free.