Ready, aim, fire! Bottle Hunt is a new shooting game, developed by Viacheslav Klimov. In this game you’ll try to shoot every bottle you see in the least amount of time possible. There are crosshairs so you can aim and a red button at the bottom corner of the screen that acts as a trigger.

There are eight different levels, they each look different, but have the same idea; old glass bottles line the bar of old saloons, junkyard cars, or old cobble walls. Each level gets a bit harder. In the first one you have to hit at least 65% of the bottles, but then after the fourth one you need to hit at least 80%. The crosshair that narrows your focus moves by itself. Sometimes slow, sometimes fast, the crosshair could be your best friend of your worst enemy. You can put your finger on the screen to try to aim the scope, but it’s pretty hard to move it. The developers did this on purpose; they didn’t want to make it too easy. 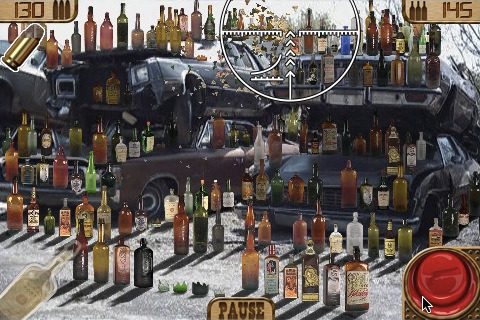 Not that this game is impossible, but it’s just hard enough to keep you playing. There are bonuses for completing each level; a mini game will be unlocked each time you hit the bottle quota. These mini games have their own rules and goals that will be explained to you each time you open the game.

The sounds are pretty accurate (I think???), and the graphics are great. You even have the option of choosing to view the bottles you have to hit in realistic form, or cartoon form. The cartoon form is presented in black and white and allows you to see each bottle better.

I think it’d be great if we could have the option of choosing a different gun. Maybe after we’ve unlocked levels or reached a high score we could choose to use a different gun with a different crosshair view. Also, there is background music that plays for you while you shoot (which is nice), and also about 15 seconds after you’ve existed the application, and locked your phone (which isn’t so nice).

All and all however, this is a fun game. I started playing it and couldn’t put it down for about an hour. I’m so grateful I found this game after my finals were completed.