Sweeter than a bowl of honey, Shadow Candy: SUGAR RUSH! brings a saccharine-filled wallop to the platforming genre. A throwback to classic platformers like Mario and Sonic, SUGAR RUSH! features characters from the webcomic Shadow Candy, the first two chapters of which are available for free at the App Store. But, speaking from my own comic-cluelessness, you don’t need to know anything about Shadow Candy to appreciate the cutesy appeal of SUGAR RUSH! 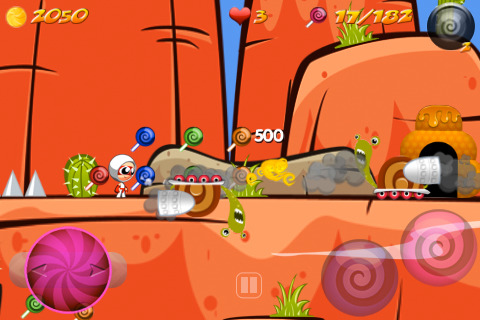 The squishably endearing Mallow Tribe has had their sacred Amai Crystal stolen, and it’s up to the white-clad ninja kid, Hiro, to save the day! This means bopping his way through 7 different worlds and 21 levels, battling adorably evil villains and collecting nifty ninja weapons along the way.

From the very start, the visuals in SUGAR RUSH! blew me away. The bold comic style is exceptionally well-suited to the iPhone, and it’s clear a lot of tender loving care was paid to getting the details just right. Some may be put off by the overly “cute” nature of the game, but I think more will be impressed by the poppy color scheme and brilliant design. It’s gaming eye candy in the best way. There’s also an appropriately bouncy soundtrack to round out the aesthetics; it’s catchy, but it can definitely get annoying after awhile, and it doesn’t look like there’s an option to turn it off.

The levels are very typical of a classic side-scrolling platformer, generic, but nothing obviously bad. Controls are handled primarily by four buttons, two directional buttons on the left and jump and throw buttons on the right. You can also switch between weapons by tapping a button in the upper right corner. Unfortunately, the controls aren’t great, marred by poor responsiveness and awkward placement. The directional buttons are slightly offset from the corner, which is unfortunate, as it’s very easy to miss them, and the controls actually become more challenging thanks to extra features, like double jump and the automatic speed dash. I really disliked speed dash in particular, because it was supremely frustrating to accidentally speed my way off a cliff while simply trying to move forward.

With unlimited lives, however, death really isn’t a big issue in this game. Enemies kill you in one hit, but there are no lasting effects other than an added notch to your death count. This makes it an approachable game for the young ‘uns, but more hardcore gamers will likely feel a bit cheated by this god mode approach. Difficulty levels and limited lives would go a long way to making the game more appealing to established gamers, while also adding more relevance to the enemies and the collectable lollipops.

That said, this is still a supremely appealing game with a lot of potential. Indications are that the developers are already hard at work improving the game, and once they work out the kinks, the gorgeous visuals and attention to detail will help Shadow Candy: SUGAR RUSH! easily stand out from the overcrowded platformer pack.

Here is a video demo of the Shadow Candy: SUGAR RUSH! app on the iPhone