You can tell a game is in trouble when the developer starts trying to sell the adding up of points as “educational”. I’d really like to meet the parent who would seriously consider counting points a good way to teach a kid math skills, but this is, in fact, one of the highlighted features of Ring-Toss. 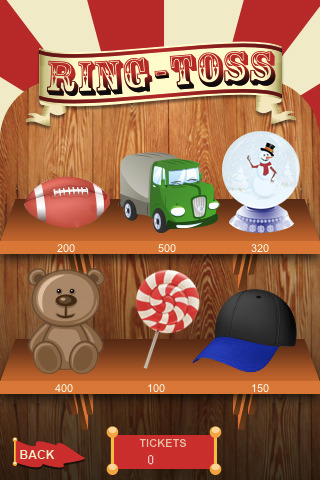 Honestly, it’s just a game of ring toss, same as you’d find at any carnival or midway, and not at all what you’d really consider an educational tool. It’s also, unfortunately, fairly dismal as a game, thanks to shoddy controls and an unmotivated interface.

Admittedly, actual carnival ring toss games are supposed to be hard, but most don’t feature wildly unpredictable physics. You start off each game with 10 or so rings (they don’t bother to show you how many you have and I didn’t bother to count), and five posts worth various point values. You simply swipe to throw, with speed and direction dictating where the ring goes, just don’t be surprised if you find your ring getting eaten by the back wall or impossibly balanced at the top of the post. These little quirks appeared near constantly, and it was near impossible to tell where a ring would end up, no matter what I did.

There’s no real tutorial or explanation of the ticket system, but from what I could tell, you receive a certain number of tickets depending on how many points you manage to score. You can redeem tickets for prizes, but I have to say, their prize redemption was just about the saddest thing I’ve ever seen in a game.

To redeem your tickets, you are presented with a typical carnival prize display: teddy bears, lollipops, snow globes, etc., all with their ticket values underneath. You select the item you want and you receive a message saying something like, “You have purchased this item!” And that’s it. There’s not even a screen where you can survey your prizes. All you get is the one pop-up message and then they take your tickets. It was easily the most disappointing feature in an already severely lacking game.

Lackluster graphics and looped circus music only cemented my general distaste for the game, and I cannot imagine who would possibly pay $1.99 for this unfortunate app.

I feel reasonably confident that if I ever play this again, it will probably be too soon. It’s not even that I hated it. It was just so dull and poorly implemented that it just felt like an empty waste of time. It definitely wasn’t worth the effort I spent on it, and it certainly isn’t worth yours.

This 3rd Party App is available at the Apple iTunes AppStore. Browse the full list of all AppStore apps filed under the AppStore category.
Download Ring-Toss at iTunes App Store
Price: $1.99
Developer: Website
AppSafari review of Ring-Toss was written by Tracy Yonemoto on June 24th, 2010 and categorized under App Store, Games, Physics Based. Page viewed 4481 times, 1 so far today. Need help on using these apps? Please read the Help Page.