If you should find yourself invaded by alien hordes, you’d better pray you’re not colorblind. A surprisingly fun twist on classic never-ending vertical shooters, Martian Swarm is like the quirky retro love child of Space Invaders and Rock Band.

To blast the invading Martian Swarm out of the sky, you must rely on your color-matching skills instead of sharp shooting. Color-coded ships descend from the top, and you must tune your weapon to those colors before firing. If you see a red ship, hit the red button, then fire. Simple. There are six different colors to choose from, but the action gets more intense when faster multicolored ships start entering the picture and you must select many colors simultaneously. 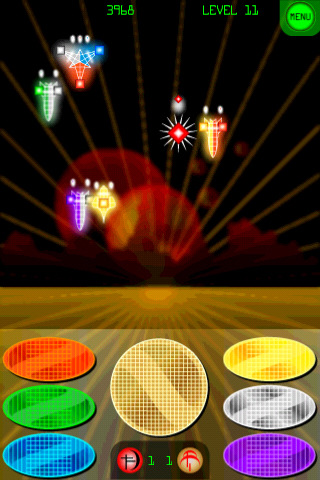 Complicating matters is the Swarm Scrambler, which has no assigned color and can be destroyed with a mere tap, but if it gets through your defenses, it will randomly rearrange the order of the color buttons. Thankfully, you’ve also got a couple of other tricks up your sleeve to help: the (questionably spelled) Destabalizer Missile and the Neutrino Freeze Spreader. The first destroys all ships within the blast radius, and the second freezes all ships on the screen, buying you precious time to blast them away. You only have a limited number of these, but extras occasionally show up to refill your supply.

There are 40 different levels to unlock, and while it does take awhile for the action to get challenging, later levels are easy to access and play over and over again.

The graphics and sound for the game are the height of retro gaming chic and nicely done. Although it’s not the prettiest game around, the simplified graphics work very nicely with the minimalist gameplay, and the game interface works beautifully. The color buttons are large and clear, and a simple but comprehensive tutorial does a great job of making the controls easy to understand. While it’s not terribly colorblind friendly, Martian Swarm makes for a fast-paced and surprisingly satisfying spin on an old standby. Comprehensive OpenFeint access and easy to navigate menus are just the icing on the cake.

If you’re a fan of Tap Tap Revenge or Guitar Hero, but feel like taking a break from the music for awhile, Martian Swarm should be right up your alley. It’s easy to learn, hard to master, and lots of fun to play.