Although it took me a good 2 hours to figure out the mechanics of this game, Exodus was well worth it. It’s fascinating in that the strategy of the game isn’t immediately enticing but it quickly becomes addictive. The game is a lesson in time management using science fiction themes.

The game starts in outer space where there is a station called Triad with three holding circles attached. Your goal is to guide spaceships—of all different sizes—loaded with people, into one of the three circles. Once the ship is in the holding cell it turns and is locked in while it starts unloading the people. 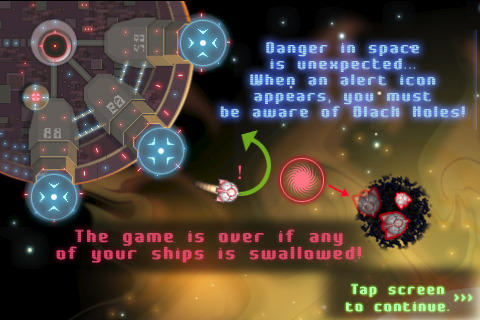 When finished the ship turns back 180 degrees and the circle it is in turns green to show it is ready to be guided out of the cell. As the player, it is up to you to pave paths for the spaceships with your finger so they can safely get into the cell, unload passengers, and leave the scene without colliding with another spaceship.

The paths you create show up on the screen as lines so it is completely visible to you where the spaceship is heading. As time goes on, the spaceships come out with more frequency and it is up to you to balance them all and keep them from crashing into each other. Whenever a ship flies into the picture, a neon green signal in the shape of that ship lights up showing you which direction it’s coming from. In the bottom left corner of the screen, there is an icon of a person with a number next to it that signifies how many people have been unloaded onto the Triad, and that number also happens to be your score.

There are 6 different stages of the game with names that draw on actual phenomena in our galaxy like, Ceres and Gemini.

For $1.99 you can own this game. although the layout of the game may seem too simplistic to be interesting or stimulating for very long, I haven’t gotten bored with it after playing for a few weeks, which is saying a lot.