As someone whose math skills betray my college education, I found Honey Queen Deluxe, developed by VanKurt Industries, to be exactly what I needed. Apart from estimating my grocery bill, the tip to leave at dinner, or the miles I’m driving, math has very little part in my life. Not since my last math course four years ago have I spent any significant time adding numbers, multiplying, or doing algebra. Enter: Honey Queen.

Putting my ability to add and subtract to the test, I needed to start crunching numbers faster. The premise of the game is to either find the number in the honey comb or add different numbers within the honey comb that are the equivalent of the one shown above the hive in a jar of honey. Each correct answer grants you an array of points based on your time efficiency and the creativity you used in producing that number. For instance, instead of going for the obvious two numbers that would match the one in the jar, you can multiply numbers or add the highest two that would give you the right answer. As you continue in the game the sum to reach increases and the combinations become less obvious. Bombarded with a hive full of numbers, you must be quick on your feet to produce the right answer. While I never grew bored with the game, sometimes I grew frustrated with my mind’s sluggish pace. Each time I played I dusted more cobwebs from my brain, however, making better use of the numbers provided. Results are proven too–I went from an embarrassingly low score the first round to a remarkably higher one a day later. 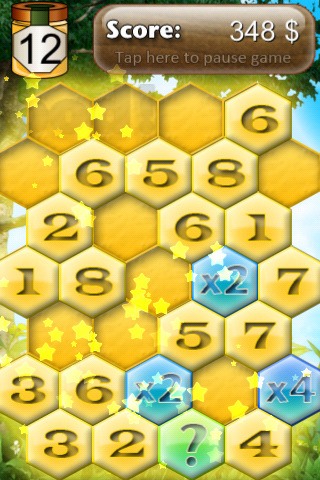 Whether to renew your fluidity in adding numbers or to prove to yourself how fast you are at computing them, Honey Queen is a great way to feel accomplished. On top of this, it’s instructions are very simple and direct and it’s layout is user friendly. Without being too childish, the game’s graphics have a nostalgic playfulness.

There is a smiling bee in a golden crown, leaves that fall from a tree, and a warm yellow-orange comb that you play on. When you click on the right combination of numbers, a bundle of stars explode from the segment of cone you pressed where the number was. You are also encouraged by little catch phrases like, “Cool!” or “Nice!” Conversely, if you miscalculate the game remarks, “Oh no!” These have the effect of making you feel connected to the game, like there is an actual interaction beyond adding numbers.

The soundtrack also makes it hard to put the game down because the music is very soothing and keeps you engaged. At the end you’re brought to a screen that reveals your total score, giving you a number of stars that reflect how well you did. If you want, you can publish your “highscore” online. In most cases, my score was not high so I did not publish it.

The one time I did I found out i ranked in 47th place, the top score being 9,609 points. This made me realize that I’m a little out of my league with Honey Queen Deluxe, but I’m not discouraged. This game is really fun, it isn’t violent, and it is really pleasant to distract yourself with.