It’s not a laser show, but Innovrai’s BEAMZ is a game where colored lights fly across the screen under the command of your fingertips. The premise of the game is simple – beams of one of the five colors will fall randomly from the top of the screen towards the bottom. Your objective is to tap the corresponding color to cancel out the beams before they hit your side – a bit like Tap Tap Revolution, but without the tyranny of a beat to control when you get to hit your colors. Beams that are not of the same color will simply pass through each other. 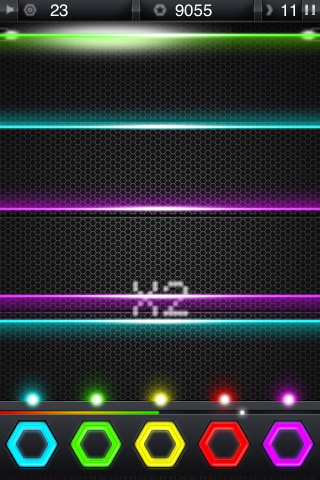 The earlier you are able to cancel out the beam (in other words, the closer it is to the top of the screen when it is canceled out), the more points you’ll earn. The number in the left of the screen counts your current score, while the number in the center tells you your highest score. The counter on the right is the number of beams you have left to cancel out before you advance to the next phase. The slim rainbow colored bar above the individual colored hexagons on your side represents how much life you have left – every time a beam of light from the opposite side makes it to yours, you lose a chunk of health. Once 5 beams of light fall from the top and hit your side, the game’s up! On the other hand, when your beams reach the other side, you gain points and also knock two off the number of beams you need to cancel out to move on.

As the game progresses, it becomes a little difficult to differentiate between which beams are yours and which are the opposing side’s, especially when they bunch together in the middle. Though there seems to be no limit to how many beams you can create at once, the game will sometimes lag and not react in time to create beams when you press the color hexagons too quickly. Oddly enough, though the title screen has some background music, the actual gameplay only has sound effects that happen whenever you tap a color to create a beam and when beams negate each other (each color has a different tone when it cancels itself out). You can choose to mute the sound effects by tapping the icon on the left top corner of your screen, as they get a little monotonous after a while. The game also allows you to pause by hitting the top right corner of the screen.

With flashy rainbow colors and enough finger-tapping excitement to keep you glued to the screen, BEAMZ is a potentially time-consuming and challenging game. However, the absence of a soundtrack during the actual game and the lack of variety in the existing sound effects detract from the well-crafted graphics and engaging play.