Upon first launch, you might think that LandFormer (developed by Streaming Colour Studios) was another Farmville-like game. Not so, good reader–it’s even better. When they describe LandFormer as a “world-changing” puzzle game, they mean it quite literally. This game app is all about raising and lowering the terrain to achieve a flat plain. 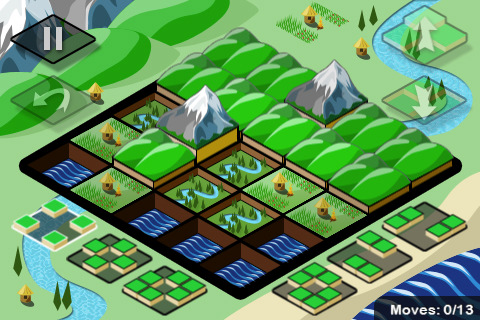 To do this, one or more of the LandForming tools (found below the grid) must be used. They are to be applied on the 25-tiled grid, because where they land, you are able to shift the square up or down. Tap the tool, then tap the board apply and center it; selected tiles are highlighted. Now you can tap the Up or Down button on the upper right to move the highlighted tiles. From the flat state, tiles can be moved either two positions up or two positions down, each one represented by a type of land structure. Repeat until all squares are flat, whereupon you pass the level and move onto the next.

But don’t be too willy-nilly going about it! Each level limits the number of moves you can make. There are 10 levels in Beginner, and you can make an in-app purchase in the Shop for 50 more levels (Premium Content for $1.99). Also in the Shop is the Discotheque Theme for $0.99, which turns your terrain into a grid full of colorful blocks. You can also create your own levels and share them with your friends to see who can stump the most amongst all you LandFormers.

The concept LandFormers is built on is simple, yet actual gameplay eventually requires much mental exertion. I highly recommend purchasing the Premium Content; the beginner levels whet your appetite, but the extra 50 levels are where the real meat of the game are. The only problem I have with this game is in moving the applied tool around the grid. Sometimes the tool seemed to “stick” to the squares it was already on and refused to be centered in another area. The graphics are pretty (except if you’re playing with the Discotheque theme), but the soundtrack is excellent: unintrusive, fun, and relaxing, with slight East Asian overtones at times. But don’t take my word for it…give LandFormers a try for free!