Goooooool! Real Soccer 2010 continues the legendary soccer game on the iPhone by Gameloft, officially licenced by FIFA. The sequel to RS2009 is just as satisfying to play on your iPhone as the original masterpiece and it includes multiplayer over Wi-Fi and Bluetooth. Your teams are all updated with the players and coaches in 8 leagues, 245 teams and as usual real players names. The action sounds more effectively live with original voice TV commentary played in 14 3D modeled stadiums. What’s awesome is that the player database is updatable via updates from Gameloft. Controls are done still using a d-pad onscreen and now you can touch the players for additional moves. 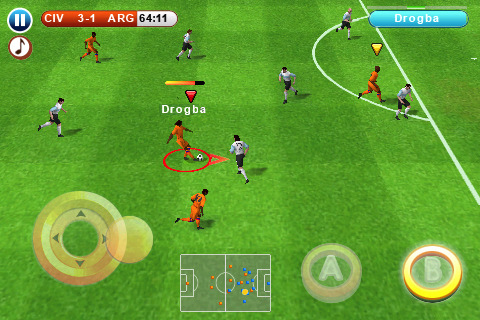 New this time around, in addition to the popular online multiplayer mode are the “legend” and “club master” modes. And now you can upload your gameplay videos to YouTube.

Get ready for some exciting football action. Real Soccer 2010 scores big on the iPhone.