Have you ever wondered what a firearm would look like up close? Well with iGun Shooter Pro you get the chance to take in as much as you can without actually holding or shooting a real gun. This app is brought to us by Schvarts Apps and costs $0.99. With your dollar you get to sample the likes of 4 types of guns.

When you open the app, you are greeted by the startling sound effects of 4 different kinds of guns that are firing, matched with the visual of 4 different bullet holes in a sheet of metal. Then one by one options are fired at you. At the top, in descending order you can select, machine gun, shotgun, rocket launcher, or pistol. That is it; there isn’t a help screen, contact screen, or anything like that. Once you have made your choice, you get to see the gun in full 2-dimensional detail against a gray background with nothing else except a banner reading GUNS that will take you back to the home screen. There are two ways to set the gun off, either tap your finger on the trigger, or shake your iPhone, iPod Touch, or iPad and the gun will start shooting rounds. With the shotgun you have to tap twice: First to cock the gun then to fire. Not only does the device you are using vibrate when you shoot, but you are also met with the sound of a piercing blast. 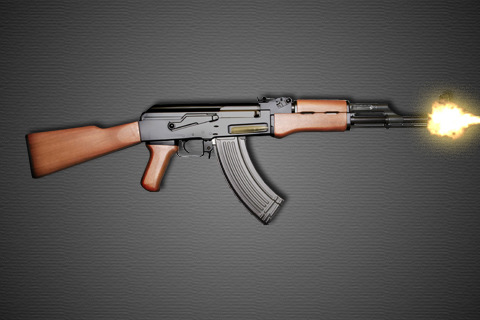 The tip of the gun you are shooting lights up when you fire to give an especially dramatic effect. No detail is left to the imagination with this app—the shotgun shells drop from the gun when you shoot—except what you are shooting at. Your target isn’t revealed with iGun Shooter Pro because this app isn’t a test of your shooting skills. On the iGun app page in iTunes there is the quote, “Shoot your friends with iPhone,” so maybe they are the intended target. I found the app to be more of a tutorial—although there was no text involved—showing the viewer the dynamic of each of these weapons when they’re used.

If you are fascinated with guns then I would recommend this app to you in a heartbeat. It is a demonstration of the shooting power of a variety of guns, in the palm of your hand.