When the world asks you to choose between werewolves and vampires, laugh in their faces and go with dragons instead. Sparkle twerps and furballs can’t breathe fire or fly, so it’s dragons all the way, baby.

A cute little platformer featuring our titular hero, PEP the Dragon is full of magic, mayhem and mystery, but it’s slightly marred by imperfect controls and awkward English. 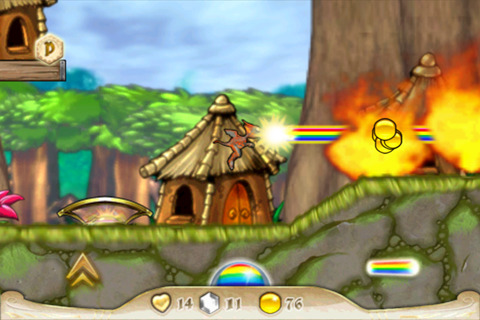 PEP’s unicorn bestie, JOSY, has been kidnapped, and it’s up to you to help him save the day. Luckily, he’s also got wings, fire breath, mad jumping skills, and even a little magic to help him out. For the most part, the game operates as a standard “jump ‘n’ run” with plenty of atmosphere and character to keep things interesting.

There are tons of baddies and spikes to thwart your path, but along the way you also unlock magic spells that grant you vital skills, like drawing bridges of ice to help you across obstacles. Additionally, there are various powerups hidden through the levels that give you temporary special abilities, like more powerful fireballs or super-charged rainbow blasts. And because dragons love treasure, there’s also tons of diamonds and gold to collect for extra points.

From an aesthetic point of view, PEP is a pretty slick game. The visuals are great, and the soundtrack isn’t half bad. Levels are thoughtfully designed and feature attractive settings. Exploring and completist types will be especially delighted the many hidden nooks and crannies hiding away secret gem caches.

Unfortunately, the gameplay doesn’t fare quite as well as the visuals. You have a choice between touch and tilt controls, and neither is particularly satisfying. Buttons are cramped with general sensitivity issues, making them difficult to master and resulting in frequent injury and death. Death is not entirely final, thankfully, as you have the option of choosing which level to restart at, with new levels unlocked at the completion of old ones.

In addition to the control issues, the lack of an easy to monitor health meter is frustrating, as it is hard to keep track of exactly when you might meet your untimely demise. There are also various technical glitches that may crash the game and get poor PEP stuck in awkward places on occasion, as well as multiple typos throughout. None of these issues are especially serious, but they are in need of a little polish, although it’s very clear a lot of love went into this game.

With a little more work, PEP the Dragon could easily be a very solid and enjoyable platformer. Right now it’s pleasant, but not quite there. Happily, it already has the graphical chops and interesting level variety to draw in some attention, and all it needs is a bit more technical shine to make the game great.