Sometimes making a game is a lot like baking a cake. You start off with some tasty sounding ingredients, in this case, cute monster creations, retro style, and 3 on 3 hockey. Mix ’em together, let them cook, open the oven, and–uh oh…your delicious cake/game has gone sadly lopsided and burned at the edges. Even if it sounded great on paper, but it can still turn out to be inedible.

To be fair, it’s not that The Hockey Experiment is a totally bad game; it just doesn’t quite rise to the occasion. The opening 8-bit-esque video and nifty chiptune soundtrack get you all excited for a funky updated twist on classic gaming, but the actual hockey action falls painfully flat. I’m a fan of the visual style, but the clunky NES-style gameplay just doesn’t make the cut. 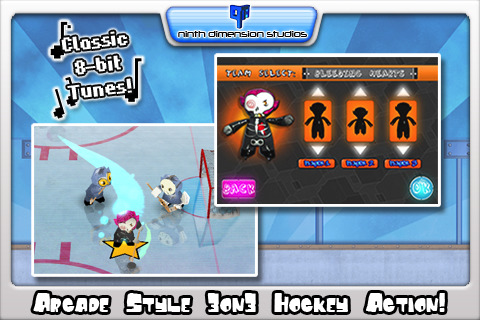 The game starts out with a mad scientist doctoring up a weird little race of Mischievous Muckety Mucks. The character design for these miniature weirdos is probably the best part of the game, as they’re fanciful and appealing. They’re a lot like decorated Munny dolls, complete with wild colors and painted on personalities, but their exuberant style never translates to skill on the ice.

There are 12 teams to choose from: 6 to start, 2 to unlock, and 4 for purchase via DLC. When you pick a team, you can then choose a body type for each of the three players or just let the computer pick at random. Each body type has various strengths and weaknesses, but nothing that makes a huge difference.

Three buttons (a directional pad and an A and B button) keep the controls simple, but they don’t work terribly well. Regular skating, passing, and shooting are mediocre at best, and checking, which frequently leads to fighting, is disappointingly dull. Switching between players is an especially agonizing ordeal, as you end up cycling through players instead of automatically jumping to the player closest to the puck. The goalie is also about as effective as a strong breeze for keeping shots out, which means scoring is all too easy for both sides.

If you don’t care at all about what happens during the game and just want to watch the little Muckety Mucks skate around the rink, then it’s not all that bad, but for anyone actually wanting to play hockey will be grinding their teeth through this awkward display. 24 Open Feint achievements help up the replay value a tiny bit, but even the 25% off sale price of $2.99 just feels too high for this failed experiment.