Featuring a sanity-shredding soundtrack that will haunt my nightmares for years to come, Bucking Heads is a simple tilt-controlled physics game that combines mechanical bulls with cheating cowgirls and a few other wacky extras.

Although it’s not intended as a big part of the game, the first and probably most memorable thing about Bucking Heads is the soundtrack, which isn’t good. The impossibly jaunty and repetitive tunes drill into your skull like a jackhammer. Believe me when I say you’ll want to preemptively nuke the wacky country music from orbit before it has a chance to lodge itself into your brain, because it only gets worse the longer you play. 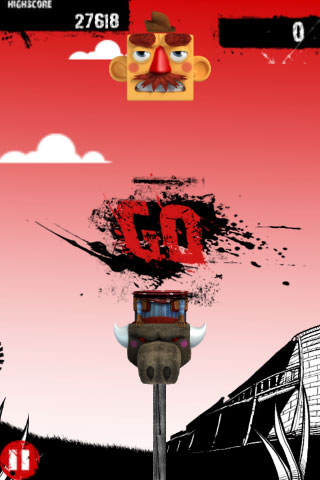 Music aside, you start out with a brief and nicely illustrated comic panel relating the plight of one very square-headed cowboy. He manages to catch his missus in the act as she’s two-timing him with his sworn enemy, the bull. Geometric bestiality love triangles, oh my! These quirky comics are probably the best thing about the game, so I was a little disappointed when the art style changed dramatically during actual gameplay, when the Cheated Cowboy exacts his bull-riding revenge.

Once you start the level, you get the Cheated Cowboy’s disconnected noggin falling down towards his body which is firmly attached to the bucking bull. There is no obvious tutorial, so it took a couple tries before I figured out what to do, but the game is actually pretty simple. You want to keep the head from falling off the screen, so you have to tilt your phone back and forth to try to keep his head in the air. Bouncing the head on his shoulders will launch it skyward again, and you get extra points for tricks, like spinning the head around.

The game is all about getting the high score, so that’s really all there is too it. The tilt controls aren’t terribly responsive, so it’s actually quite hard to get a decent score. There are two additional levels to unlock once you’ve reached certain scores, but it ain’t easy. Scores are saved locally, but there is no option to track multiple user accounts, and while OpenFeint access allows you compare scores globally, but there are no other achievements or special features beyond that.

Although I really dug the comic-style cut scenes, Bucking Heads is a very basic game at best with an absolutely excruciating soundtrack. If not for the slightly risque storyline and awkwardly responsive controls, it’s the kind of game I could see younger kids really responsive to, but it doesn’t have quite the same charm and appeal of Doodle Jump or other endless high score games. The price ($0.99) isn’t bad though, and it’s definitely a challenge, so if you’re lightning-fast, hard of hearing, and dying for a fresh accelerometer game, Bucking Heads is a decently cheap ride.