If you think the shortest distance between two points is a straight line, then you clearly don’t watch enough James Bond flicks. For the past few years, largely thanks to Casino Royale, parkour has been steadily gaining ground as the latest and greatest physical activity since man learned to walk upright.

In theory, the purpose of parkour is to get from point A to point B as efficiently as possible, but in practice, this usually translates to a lot of jumping, climbing, and sliding with as much style as possible. A traceur is a male practitioner of parkour, and since men make up the majority of parkour and video game enthusiasts, it’s no surprise that someone set out to combine the two. 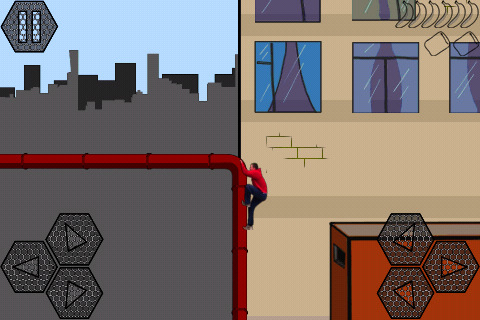 iTraceur – Parkour/Freerunning Platform Game is effectively a platformer with a jazzy control scheme. You have six buttons, three on each side: left and right in their respective corners, along with an angled up and down button for each. Using these buttons in various combinations allows you to launch your red hoodied traceur into a variety of jumps, rolls, and climbing positions.

Exploring and finding your own way is a major part of the action, so don’t expect a clearly defined path. You’ll usually have the option of walking past a tree or building or climbing up the side of it, and either choice will lead to different areas to explore. It’s worth mentioning that the levels are massive, so you can spend a lot of time investigating every nook and cranny.

That said, the controls are fussy at best, so you will also spend a lot of time falling off things and having to retrace your steps constantly. You can’t die or even hurt yourself, even falling from a tall building, so while fear of death or injury shouldn’t hinder you, I might hesitate to share this game with impressionable youngsters.

Visually, iTraceur is a mixed bag, because while the parkour animations are very cool, they are stylistically at odds with the uneven cartoonish background. The little traceur is done up in a blurred watercolor style with very realistic movement, while the background looks like a bad Simpsons imitation. Putting the two together looks odd, to say the least, and the bland, generic soundtrack doesn’t do the game any favors aesthetically, although you can play your own music.

The game is also severely lacking in goals. There’s no story to speak of and nothing to do beyond wandering around the levels and collecting banana bonuses. Unlocking the hidden parkour videos didn’t feel like much of an incentive to me, and the whole project felt unfinished, like an ambitious tech demo instead of a fully fleshed out game.

Now, there aren’t a lot of purely parkour-themed games out there, so iTraceur does a reasonable job of filling a particular niche, but without more direction and a more cohesive style, the game is just going to feel incomplete.