Finger Balance from Coconut Island Studio is a new type of physics based iPhone game. In Finger Balance you use 2 fingers to move a metal rod balancing a marble towards a target. The two sides of the rod move independently of each other and so the marble starts to roll left and right as you elevate the rod. The objective of the game is to keep the marble from making contact with the walls as move your fingers/rod to the bottom or top of the screen where the target line is. 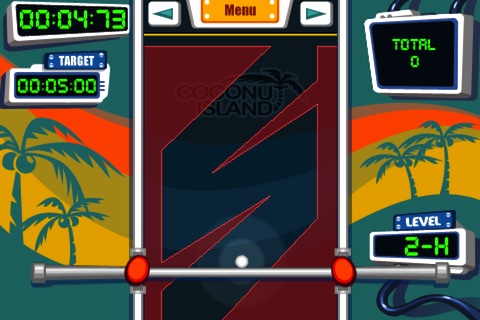 This is a very challenging game and reminds me of those wire loop games at the carnival where you have to move a loop through a metal wire, only in the case of Finger Balance its a rod and ball along a path. Since you have to use 2 fingers to control the game at all times, Finger Balance is best played when you place your iPhone on a flat surface like a desk as you move through the paths. Speaking of the path, there are a bunch of levels to go through. To be precise the version I’m testing has 24 levels spread across 3 difficulty levels (easy, normal, hard). Finish one to unlock the next and so on. Looks like more levels will be added soon which would be nice.

Along with the challenge of not hitting the burgundy platform, you also have to race against time to clear each level. Each level has a target time that you are supposed to finish in which is shown to you along with your time on the left side of the game. On the right side you see a TV monitor that displays a nice live radar display of the current tilt level on your balanced rod.

Finger Balance includes a professional and catchy soundtrack and fun sound effects. The graphics are colorful, crisp and the interface is very arcade like. After you reach the goal line in each level a happy little dude jumps and screams with joy. The movement of the ball is tied to the rod and not the movement of the iPhone itself. It would be nice if there was a setting that used tilt controls, but then I guess the game wouldn’t be called Finger Balance, right? The left and right side of the iPhone screen are used for stats and scores and the action is squeezed in the middle in landscape view. This is fine but it feels a little crammed, especially when your add two fat thumbs like mine on the screen. Widening the game-playing area somewhat might help this. 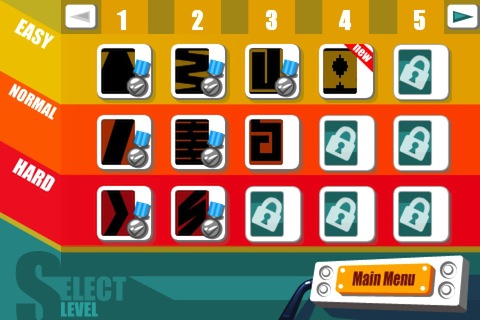 Overall, Finger Balance is a new type of physics inspired puzzler for the iPhone that is sure to be a favorite among challenge loving gamers.