In the beginning, Doodle God created the iPhone. On the first day, He foresaw utter boredom, and so created a sweet app to playeth with. Praise be unto the Maker for His most glorious wisdom, without which, we would yet be adrift in a digital world of total lameness. Although we are not worthy, we giveth thanks to Him for this glorious bounty.

When you see as many games as I do, it’s rare to get a chance to play one to completion. With Doodle God, not only did I completely finish the game, I couldn’t put it down. Admittedly, it’s not a very long game, but for several hours, it had my total and undivided attention. And, this is the important part, I absolutely LOVED every second of it. 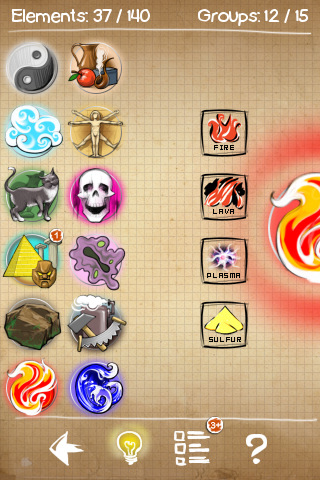 The premise and gameplay is ridiculously simple and elegant. You, the Doodle God, set out to create a total of 140 different elements from a starting pool of just four: earth, air, water, and fire. You create new elements by combining two old ones, say, water and air to make steam. Simple as that. Sure, it starts out easy, and not all combinations work, but the fact that you eventually need 15 different categories just to keep everything straight should tell you that things quickly get more complicated the more elements you have.

And I do mean “elements” in the loosest possible sense. For example, I was never a chemistry buff or philosophy whiz, but I’m pretty confident beer and vampires are not traditional elements in either one. This love of the unconventional and sense of whimsy, however, is part of what makes Doodle God so addicting.

Each new element you unlock comes with a pithy quotation, Civilization-style, and there is a page to track successful combinations. If you get stuck, there is a hint system that gives you one of two kinds of hints, either suggesting a element to create (? + ? = TURTLE?) or recommending groups of elements that might combine favorably.

Now, to be fair, there’s no real point to the game beyond a manic Pokemon-esque frenzy of “Gotta get ’em all!”, but the simple gameplay and engaging art style make Doodle God trivial to learn and near impossible to put down. Discovering each new element was an utter delight. 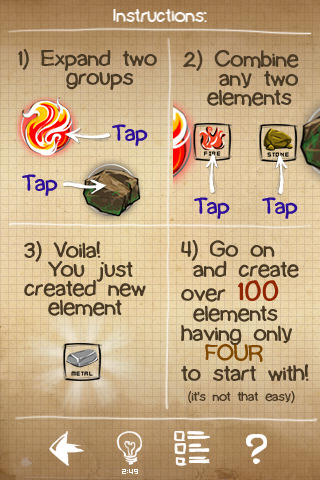 My only real complaint with the game is that some of the combinations don’t make a whole lot of sense and the 3-minute recharge time for the hint system feels like an eternity. Of course, this doesn’t really become an issue until late in the game, by which point, you will probably already be in thrall to Doodle God.

It’s not really an intellectually satisfying or especially challenging puzzle game, but the heady triumph of finding all the elements is hard to top. It may not be very deep, but Doodle God is about as simple, accessible, and gorgeously presentable a game as you’re going to find.