Gorillaz – Escape to Plastic Beach is the latest Gorillaz iPhone game to help advertise their latest album. Its a 3D game that features voiceovers by the band members, music from their album, and has a Global Scoreboard system. At first impression, the art is interesting and quirky. Jamie Hewlett is presented very well here. The concept is great. A cast of cartoon musicians playing Hypnotic pop songs with odd lyrics, strange music videos, and unique art style want to make a game? Awesome! Is it a fun? Does it present the Gorillaz franchise well? Let’s take a look…

You play as Gorillaz band member Murdoc. Murdoc is in charge of a giant island prison that holds only one prisoner, 2D. This is a flight simulator with the iPhone’s tilt controls.

So you begin the game right on Level 1 and a cutscene appears with voiceovers. The comic book look has appeal with its unique style. After a brief PowerPoint-style tutorial it presents green rings and red rings. The green adds seconds to your time limit and the red boosts your speed. If you’ve ever played Superman 64 like I did, this is a bad sign. The 3D graphics are average at best. Nothing stands out and for a band with such a defined art style, the levels feel empty and bland. The soundtrack has variety but much of it becomes frustratingly repetitive. The sound effects serve their purpose but overall, it felt irritating. 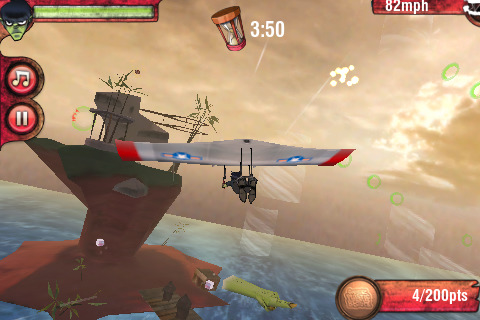 The gameplay isn’t revolutionary. You fly through rings, avoid cannonballs, and try to shoot targets to increase your score. Shooting is simple but incredibly stiff. You fire straight ahead, which is severely limiting. Giving you an aiming mechanic would prevent having to miss rings deliberately just to destroy some targets. Keep in mind that the rings are -vital- to certain missions. Enemy cannonballs are slow, so flying leisurely allowed me to avoid taking damage and since the game doesn’t reward you for a high score, all that’s left is to complete the mission objective and fly through rings. It felt like a driving test.

The novelty quickly descends into gimmick the longer you play the game. It actually starts to hurt. You hold the iPhone/iPod flat, facing up and you hang your head over the screen. My neck starts hurting and it makes me wish that the game had on-screen controls so I can hold it more comfortably. I know its nitpicking, but bad music, DMV gameplay, AND neck pain?

This game can pass the time, but the gameplay is slow and lacks any real challenge besides trying to control Murdoc’s flight. This isn’t a game you can just pick up and play for a few minutes, it takes a while to get through a level and that is only if you don’t fail. This app is nothing spectacular, so in the end, it’s not worth the massive battery drain for running a 3D game and the $1.99 price tag.

With some improvements to controls, less boring scenery, and some type of incentive to work for a high score, this could get much better. As it is, it’s below average.

Notes: This game would get an extra .5 if it were cheaper or made free. There is also an iPad version of this game (Gorillaz – Escape to Plastic Beach for iPad $1.99) with much better graphics and gameplay. The two apps are sold separately.