What do you get when you throw beefy gladiators and dangerous obstacles into a bloodthirsty arena? That’s right: a hot mess! And I do mean that literally and figuratively, because Arena Arcade has as many problems as an early Christian with a pack of starving lions.

The object of the game is to keep your burly little gladiator dude away from stuff that will kill him. That list includes such things as massive boulders, vicious beasts, homicidal maniacs, and even an invincible giant. As with the ancient Roman arenas, the odds aren’t really in your favor, but there’s also no combat, which I found a little weird given the setting, just a lot of running away.

There are plenty of enemies to avoid, and there are also random power-ups that appear for you collect. Some are better than others, but The frenetic pacing makes Arena Arcade feel a bit like Looney Toons meets the marble-rolling Labyrinth, but with little charm and none of the classic or elegant design elements as you embark on The Adventures of the Cowardly Gladiator. 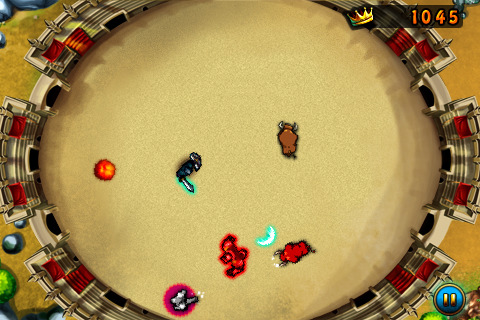 The only thing standing between Muscles McYellowbelly and certain death? Tilt controls! Now, I’ll never be a strong fan of tilt controls, and these were okay, but with no tilt calibration, there were plenty of headaches and much swearing during my brief time with this game.

As in any game of survival, the action is largely repetitive, as chasing the high score is your only real goal, but uninspired obstacles and lackluster design makes the game feel bland and strongly takes away from the replay value.

To top things off, while any in-game information and instruction is quite scant, it’s also heavily laden with typos, which I’m guessing are the result of some wonky translation issues, as the developers appear to be based out of Ho Chi Minh City. Now, I have a lot of sympathy for foreign developers trying to break into the English-speaking market, but these are the kind of vital details that need to be addressed before the game is launched, not after. Typos in the main menu just look painfully unprofessional and reflect badly on the rest of the game.

This is not to say that Arena Arcade is unprofessional. The tilt controls, as I mentioned, were perfectly functional, and the artwork, though generic, is fine, but it feels very much like a work in progress that was rushed out of the gate before a final quality control check. No doubt many of these issues can and should be addressed in later updates, but with so many better games out there, it’s hard to see anyone paying for Arena Arcade, and I imagine it might fare better as a free ad-supported app instead.