The Jim and Frank Mysteries – The Blood River Files review

Seeing as I kind of have a thing for academic types, puzzles, and top hats, it should come as no surprise that I secretly pine for a crack at Professor Layton on the iPhone. (Layton, baby, call me!) That said, it may be a cold day in Hades before that should ever come to pass, so in the meantime I have to satisfy my puzzle-loving urges with the awkward 15-year old duo of Jim and Frank, and they’re not terrible, but they’re no Professor L.

If you’ve never played a Professor Layton game before, you really owe it to yourself to try one. Imagine a kind of interactive storybook where you transition between various brainteaser-type puzzles throughout by talking to the story’s characters. Answer the puzzles correctly and you advance the story. It’s a fantastic series and delightful game model, one The Jim and Frank Mysteries does its utmost to emulate. For the most part, they do an okay job, but it come across as extremely derivative. Everything from the puzzles to the art style feels like a watered-down copy instead of an original game in its own right. 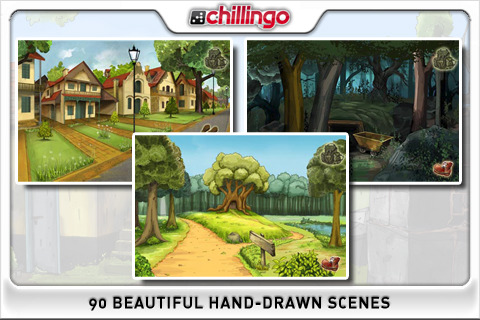 Jim and Frank are on a mysterious quest assigned by Jim’s grandfather as a 15th birthday rite of passage. They’re kind of a dorky pair, but not without some goofy charm, partly thanks to some decent voice acting during key scenes. Together, they carefully investigate Tinyville and interact with its quirky, puzzle-obsessed inhabitants. The dialogue isn’t great, but really, you’re just here for the puzzles.

The puzzles, the meat and potatoes of the game, aren’t especially inspired, but they’re generally satisfactory, challenging without being impossible, with a reasonable variety, everything from math problems to mazes. They’re fairly standard brainteasers, and that’s really all you can say about them. 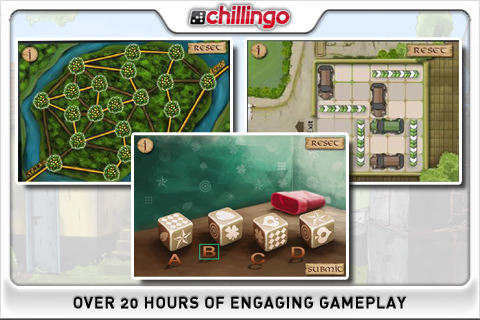 When you encounter a puzzle, you can guess the answer as many times as you like, but the amount of gold it is worth decreases with every incorrect answer. If you get stuck, you can use special Eurekas to buy hints or just skip puzzles entirely, but this can get expensive, and Eurekas are very limited. Each screen has a couple Eurekas hidden in it, and you can also buy a stash as an in-game purchase ($0.99 for 30, $1.99 for 75, and $2.99 for 120), but if you’re good at puzzles or handy with Google, you can generally forgo their use entirely.

There are also a few random minigames scattered throughout, which helped break it out of the Layton mold, but not very much, and the minigames don’t really add a lot to the game.

I can’t say I loved The Jim and Frank Mysteries, mostly because it just made me wish I was playing a Professor Layton game instead, but I will say that you can get a hefty chunk of playing time out of this for not a lot of cash. The current sale price of $0.99 is quite reasonable for a good 10 to 20 hours of playtime, but Layton fans should remember to not set the bar too high.