Sushi Cat! Sushi Cat! Does whatever a Sushi Cat does! Likes to eat. Lots of rice. To get fat. He’s the best. Look out! Here comes the Sushi Cat!

To call Sushi Cat a little strange would be a bit like calling a sumo wrestler slightly big for his age. Based on the popular Flash game of the same name, Sushi Cat employs massive amounts of kawaii surrealism to defy explanation. After spying a sexeh pink kitteh in the window, our titular hero goes through a series of ordeals in the hopes of winning her heart. This means attempting to eat as much sushi as possible while falling down what looks like a Plinko board from The Price Is Right.

It’s sort of like the weirdo lovechild of Peggle and Katamari Damacy. You have the semi-random game style of Peggle, except that instead of balls, you drop in a round, blue cat that gobbles sushi and gets gradually fatter the more he eats. There’s not a whole lot of skill involved, but it’s undeniably hypnotic to watch the adorably gluttonous catball squish and bounce his way down to the bottom, thanks to a surprisingly excellent physics engine. 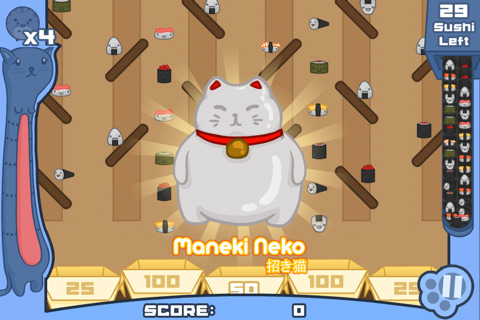 Without a doubt, it’s the art style that makes the game, with its strongly Japanese-inspired blend of cute and bizarre. While the story doesn’t make a whole lot of sense, the gorgeously animated cutscenes throughout the game give a lot of personality to our silent, feline hero and help break up some of the repetitive gameplay and keep you engaged.

Because it’s primarily a game of chance, gameplay itself is fairly minimal, but it’s incredibly addictive. You’ll spend a lot of time fixated on the cat’s every move, but only as a spectator, since you can’t really do anything to affect its path once it’s started to fall. The one exception to this is the random bonuses available in certain levels, which occasionally allow you to do things like aim and launch Sushi Cat back up to the top of the level.

There is a minimum amount of sushi required for Sushi Cat to eat before advancing to the next level, so there is a bit of strategy involved in how you start him off, but it’s usually not very difficult, and there’s also no punishment for failure. The biggest complaint you can make about the game is that it is on the easy side and feels just a little too short. It’s not at all difficult to complete the entire game in under an hour, but it would be a fun hour, nonetheless.

Sushi Cat is not an especially deep or challenging game, but it’s a brilliantly off-the-wall bit of fluff. Thanks to its weirdo premise, abundant visual charm, and simple, engrossing gameplay, there’s really nothing out there quite like Sushi Cat.