This is a game very similar to Doodle Jump, but is developed by Ran Zhang. You jump automatically and all you have to do is tilt the iPhone, iPod touch, or iPad to drive your Bunny Ninja to the left or right. You step on platforms and avoid being hit by projects and bombs that a Pirate Bunny drops on you. Yes. This game steps into the Pirates vs. Ninja argument. But does it prove itself as a good game?

The title of this game is actually more descriptive of its back story then anything this game presents. One level with a lovely mountain view and floating tree logs. You play as the Bunny Ninja and the main antagonist, the Pirate Bunny, hovers above you with a rocket pack dropping bombs onto platforms. You can fire at the Pirate Bunny with power up ninja stars that you can fire by touching the screen. The stars track where you touched so you can aim at the Pirate and knock carrots out of him… I know it sounds weird, but just go with it.

This game has some annoyances. First, it’s incredibly annoying to collect carrots. To do so, you must shoot the Pirate with your ninja stars, make him drop carrots, then collect them. He will drop bombs directly under himself, which means you should shoot him at an angle, but since you need to collect the carrots he drops, most of the time, you have to risk near death just to get some extra points, or get a face full of bomb. The sound effects in this game are also extremely annoying. Bouncing noises and a silent background… it’s boring and annoying at the same time. 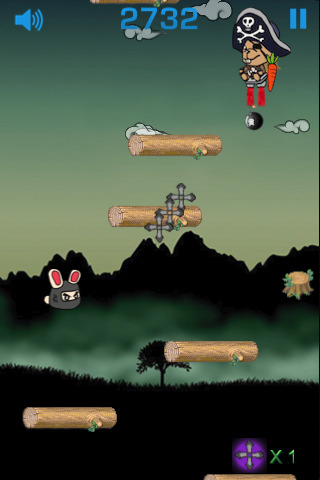 You know, I believe the biggest flaw, and most disappointing aspect of this game is that the theme is wasted. You don’t have any unique trait to this Ninja-fied Bunny. You can’t use powerful magic, climb walls, wall jump, clone yourself, or ANYTHING that you would imagine a cartoon ninja to be able to do. The bunny simply hops up and down slowly and you guide him. The Pirate bunny doesn’t seem all that interested in blowing you up… he just floats and drops bombs leisurely. If he angrily threw bombs, shot at you with a pistol, or maybe even had some of his pirate crew come and attack you while you tried to climb platforms, maybe it would have taken advantage of the theme of this game.

This game isn’t all that bad, it’s just feels like unfulfilled potential. So much more could have been done besides a slow climbing game with no incentive, no progression, and no real theme. Most of the game is decoration and even that is wasted as well. Just because it looks nice doesn’t mean it’s a good game (I’m lookin’ at you Final Fantasy XIII.)

I’m not trying to tell you ‘Don’t download it.’ I just mean that if you are split between this and any other app you are interested in, go for the other app. Oh, and by the way… Ninjas would TOTALLY kick a Pirate’s butt.