Prior to the periodic table and chemistry as we know it, there was alchemy and its belief that there are four basic elements that make up much of what exists: fire, water, earth, and air. Three of those four elements are represented in ECO, a new single-player puzzler by Aberrant Entertainment. The objective in alchemy is to mix substances to produce gold, and so it is with this game app.

ECO is unique in that it combines the essentials of a match-three game with the strategies of rock-paper-scissors. However, instead of using rocks, paper, and scissors, water consumes fire, fire burns plant (a.k.a. earth), and plants soak up water. The element that shows up at the very top is the one you’re using to consume another element, which must be in a group of three. For instance, if a fire tile is seen at the top, you must tap a plant tile that is surrounded by at least two other plant tiles. Doing so will convert all the corresponding plant tiles to gold. Once the entire grid has been converted, the level is won. I don’t know why the air element isn’t represented, but it would’ve been interesting to see it included. 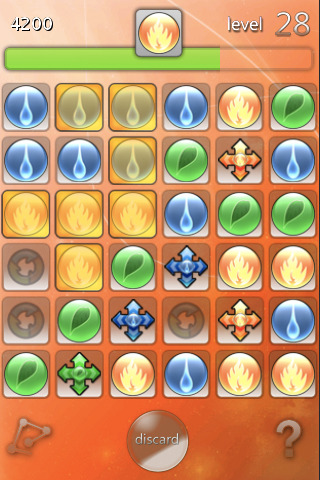 There are 40 levels total, each more complex than the last. The further along in levels you are, the more difficult they become. First, there are tiles containing things other than the elements; some are power-ups, and some are obstacles. More and more are introduced, and it becomes increasingly harder to match three. Another aspect to be aware of is the green timer bar at the top. If it runs down to zero before you’ve finished turning all the tiles to gold, you’ve lost the level. Using the Discard button down at the bottom also decreases your time, but allows you to change the current element so you can attack with one of the others–use it wisely.

The pretty celestial map ties together the theme of balancing the elements–and thus, the universe–by using them against each other, but that’s really just extraneous fluff. What’s really important is that ECO uses familiar rules, but in such a way that it creates something completely unprecedented. You can no longer just mindlessly seek out the same colored objects; now you have to be aware of an entirely different level of attack. Comparatively, the rest of ECO is unpolished: the music is nice, but looped and short, the tutorial could use some bulking up (frankly, I’d want to have a list and explanations of the power-ups and obstacles), and the design childishly simplistic. However, if you can ignore all that, the game itself is a great concept that requires a lot more effort to win than it first seems. ECO is a diamond in the rough that you can experience for only $0.99, so give it a try if you happen to like rock-paper-scissors. An iPad version is included in the universal binary.