This app is a Tower Defense game based in a medieval time period with magic, towers, and cleavage revealing chest plates. It’s available for iPhone, iPod touch, and iPad and is released by Kyy Games Oy. It’s a combination of Strategy and RPG that follows a story line with a (very rare) female protagonist that is proclaimed as intelligent, strategic, and heroic. A Great start to the game.

We begin Frozen Maiden with the main menu. The main menu has pretty nice music that sounds professional and well done, but the image of what appears to be the actual ‘Frozen Maiden’ looks radically depressing and dark compared to the more lighthearted music. It’s a jarring difference and it was strange to me.

This game presents a solid art direction. It’s all very colorful with high attention to details and all of it has a hand painted look and feel to it. Some portraits of people in this game can seem a bit eerily flat, however they really give the impression that the story is being told off of drawings etched into ancient coins or ancient scribes or something. It’s difficult to explain, but it has a unique charm to this style of art and for some reason, it all matches the time period. 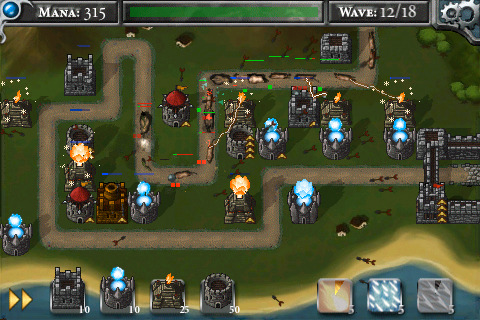 In game, you drag towers from your ‘shop’ at the bottom of the screen, then place them on the field. Some areas have pre-built walls that give your towers longer range, but many are placed in bad locations for efficient tower placements. Otherwise, this game has a solid Tower Defense system, though I do have an issue with how small the enemies are. I’m not sure if it’s any better on an iPad, but the monsters are scaled to the size of the road, and man, they are tiny. It feels like wasted opportunity to draw unique and interesting monsters, similar to games like Crystal Defenders, TapDefense, or even the game that this app really reminds me of: Fire Emblem.

Some cutscenes have voice-overs and others are simple RPG style text screens. If you’ve ever played Fire Emblem, it’s pretty much that. The characters, the time period, the war story, and even the stage selection map screen all invoke memories of different Fire Emblem games. The combat itself however, is a Tower Defense game with no soldiers or armies, just towers with some carrying elements like ice and fire.

The leveling system is balanced and consistently provides new towers, magic skills, and enhancements which help add depth to this game. The beginning was simple and begins with easy enemies and an even pace. This ease is shaken very quickly and I ran across one mission that literally wiped me out in a single wave. The difficulty ramps up abruptly in Frozen Maiden. With such a huge cluster running down the track, one or two low level towers will barely scratch the group as they over take your health in one shot. Maybe showing the difficulty levels of each stage on the map screen would help prevent instant cheap kills like the ones I ran into, but then again, I beat the stages with some trial and error and better understandings of how my towers work, so maybe it’s a good thing?

The difficulty can fluctuate but the art, the gameplay, and well-paced leveling system make this game deep and detailed. With a storyline and RPG style leveling up, this game definitely stands out of the crowd. It’s seriously entertaining and I was motivated to level up and learn the best areas to plant my towers despite failing from time to time.

Tweaking the difficulty or showing the player a rating for how difficult a level is would definitely help. The effort and hard work shows.

Here is a video demo of the Legends of Elendria: The Frozen Maiden app on the iPhone