Basically, Badminton 2010 is a Rohit Gupta release for the iPhone, iPod touch, and iPad. Simply put, this is a Badminton sports game where a player can play in tournaments, hit shuttlecocks, and run around different courts and stages. First off, this game costs $4.99. You’d have to present a whole lot just to justify this price tag. Does this game make it feel like the price is worth it? No. No it doesn’t.

Graphically, I can’t say that the game presents anything impressive. You have a variety of uniquely colored characters, each with different outfits to distinguish them. Courts are plain and rather simple, though they do look realistic. Any non-player character looks cloned and very copy-pasted so nothing special. The interface is simple and intuitive with decent graphics and swappable control schemes. Again, nothing special. 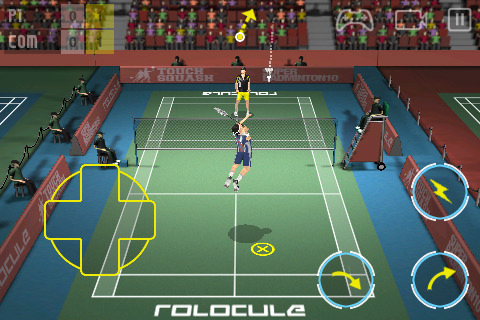 Musically, I can’t say that the game presents anything… at all. The title and character select menus share the same extremely average song. Its repetitive, but isn’t grating, so I guess I have to thank the game for that. In a Badminton match, there is no background music and all you hear are the racket swishes, shuttlecock smacks, and the random crowd cheers/groans. It’s not bad, it’s just feels average.

Game Play…ically, the game is solid. You move with a very responsive joystick controller or an extremely stiff d-pad configuration. You have three action buttons: a low a low hit, a high hit, and a downward smash. The smash is completely useless since most of the time as the opponent usually hits the shuttle to the far ends of the area, making the smash crash harmlessly in front of the net, and therefore giving your opponent the hit… that is, IF you can hit with it. The hit detection is generally very good with the low and high hits and the AI seems to be able to hold its own on normal and hard difficulties.

Categorically, this game is average. Animations for movement can glitch up, the game play is extremely repetitive (high hit, wait for opponent, high hit, opponent weirds out and doesn’t hit back and you score a point. Rinse and repeat), and the characters all play close to identically. This game is on sale for $2.99 but originally $4.99. Unfortunately you can’t play multiplayer against other players.