Laura Jones and the Secret Legacy of Nikola Tesla review

Finding out your sweet little grandmother knew Nikola Tesla would be pretty odd, but finding out that he entrusted the secret of his greatest invention for her to discover would definitely top that. Of course, your grandmother no longer being a spry young maiden, the journey of discovery falls to you (with coaching from your grandmother on the side, of course). You are Laura Jones, and you are the star of Astar-Novosoft’s game app, Laura Jones and the Secret Legacy of Nikola Tesla.

What starts this entire adventure off is a letter full of clues from the late Nikola Tesla himself. It turns out that he’s hidden parts to his greatest invention around town, which you will to need to obtain and put together. But first, you’ll need to pass a test (or two) to show that you are worthy of possessing the parts. Your grandmother decodes each clue, and off you go to solve puzzles, make friends, and thwart the bad guys who also want to get their slimey hands on the invention–to the detriment of mankind, obviously. 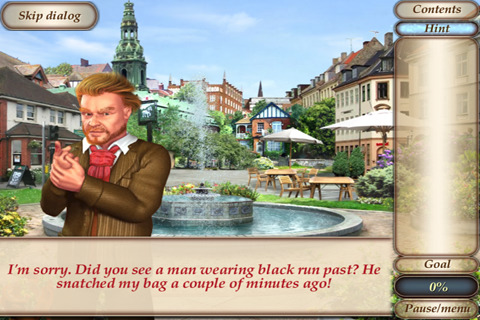 The majority of the puzzles generally test your hidden-object skills. Peruse the scenery for the items you need to find–you can pinch-zoom and scroll with your fingers, like a normal photo–and tap to select it. But it’s not always that easy! Sometimes you’ll have to use your common sense to properly utilize the items found. For example, can you find all the pieces of a broken cell phone and then put them back together? Other times, especially when battling for a part, you’ll have to solve a tricky puzzle. Thankfully, there’s the Hint button on the top right, which you can use once before it regenerates enough juice to help you again.

When I started this game, I had no idea that I would be frantically trying to finish it several hours later. The hidden-object mini-games were getting a bit old by the time I neared the finish line, but the other sorts of puzzles were challenging enough to make up for mind-numbing poking. Something that threw me sometimes was that there was a certain order to puzzles sometimes: finding this would do you no good unless you did that first. Unfortunately, you’re often left floundering around until you magically stumble upon the progression of steps (or use the Hint button). Other than that, this entire game app was extremely well-executed. The graphics are awesome and detailed (maybe too detailed, as is the case when you’re digging through a garage full of doodads for a specific item), and the soundtrack is fantastic, but what impresses me the most is the voice-acting. Too often, voice-actors are flat and unconvincing, but that is entirely not the case with Laura Jones and the Secret Legacy of Nikola Tesla. Each voice was unique and completely suited for the character. (One minor quibble, though–I thought Laura was visiting her grandmother outside of the USA? Where are all the accents??) Do grab this; it’s on sale for $0.99!