This app is brought to us by Strange Mind Films and David Donihue and is a cinematic-choose your own story movie/game hybrid. It’s available for iPhone, iPod touch, and iPad and is only appropriate for ages 17 and up… and it includes this review as well.

For those of you who have ever read a choose-your-own story book, this will be very familiar territory. You play as Eric. He has the strange tendency to spin wildly while trying to figure out a difficult decision.

I always check for tutorials to get a better grip of the rest of the game. That is when I saw the first real sin of the game. The app actually claims that it is ‘one of the most important piece of cinema ever made.’ Wow, that is one heck of a boast when you throw yourself into the same ring as Citizen Kane, Titanic, King Kong, Toy Story, and many others. When you use arrogant, pretentious statements like this, then you better bring your A-game. 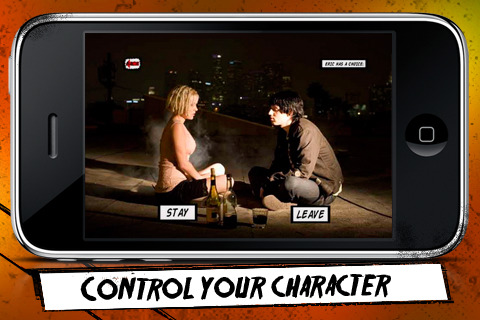 I’m sorry ‘The Weathered Underground’. When you begin with a statement that you do not have the right to make about your own product, it really irks me. I’ve played games that have far better choice systems and watched films with far better story progression that have changed it’s genre forever. This app will not do that and it really shouldn’t claim that it will.

I would like to ask the developers to remove the ‘most important’ statement. It’s equivalent to someone walking into a room and announcing that they are cool, fun to be with, and great in bed. No, it’s not up to you to determine that.

The constant ‘art’ filters are lazily applied, making it distracting and often left me wondering what the actual actors and sets looked like. Sometimes simplicity would be the most effective, especially when you save the effects for dramatic moments to add emphasis and focus or make action sequences especially chaotic or bombastic. When you abuse it, the effect loses all impact.

The audio and video quality was pretty good (It took 15-20 minutes to download and install this huge app, so it better be good). You better wear earphones if you wish to use this app in public. Some of the dialog is downright embarrassing in public. Otherwise, production value is top notch. They shot tons of footage and recorded a huge amount of dialog. I was especially impressed by how your choices really do change the game’s narrative and endings. This is actually really interesting and well done.

I won’t dock this app for the tutorial fiasco. It wasn’t that bad of a game. It’s just not what those 5 star raters claimed to be a perfect experience. The story drags and the art was distracting, but I was impressed by the production and by the different endings. So to summarize, the best part of the app was when it ended.

Congratulations for your reading of this review as this review is one of the most important reviews ever made. Seriously though, it’s only a dollar, so download it and see for yourself. I am almost positive that you will enjoy it more than I did.