Run Kovo is a platform game where you have a limited amount of time to guide Kovo as he runs away from a giant fire while you, the player, manipulating a series of different platforms to help him. Kovo can’t jump, can’t walk up steps, and can’t defeat monsters by stomping on their heads or head butting them. This app is available for the iPhone, iPod touch, and iPad.

The concept is a fun one. Instead of manipulating the main character like so many other games, this one has the main run straight forward and you (playing as… I don’t know… God? ) manipulates the world around him to guide him to safety from a giant fire thing.

The art is very colorful, but has no context. The giant floating pillars are plain and split-mirrored to itself, so repetition in the look and style is constant. Each pillar is colored differently to separate each other visually. Kovo seems to be some sort of “Where the Wild Things Are” monster in a business suit… weird, but actually appealing. 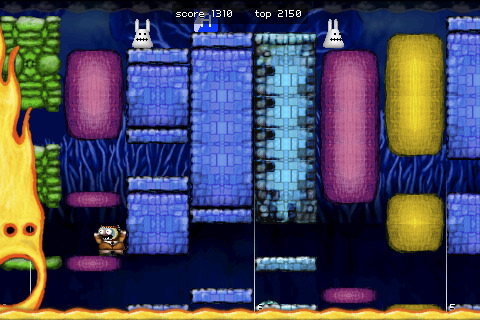 The sound effects and background music is… confusing. It sounds like rainforest construction and chainsaws in the title screen, then in the main game it’s a techno/dance beat with funky sound effects. It’s really weird.

The game play is simple, but difficult. I can’t tell you how often a pillar just doesn’t seem to move. The cheaper deaths usually come from an unexplained stopping of the pillar due to… what? Hitting the bottom of the lava pit? Hitting the top of the sky? I don’t know… but something stops the pillar and you end up dying because you have to quickly move Kovo up on his original platform instead.

I’m sure there are people who are really good at this game, but I set a 2000+ record for just keeping Kovo at the top of the screen for as long as possible. It’s strange to see, but it’s really boring to play. You just lift or drop platforms and keep him safe. Sometimes random enemies appear and honestly, it’s really difficult to avoid some of them… especially since once you go too low, you’re pretty much dead since moving the towers takes a lot of getting used to.

I didn’t have a whole lot of fun with this app. There are many MANY much more entertaining time-pressure games and I think the main reason I have against this game is that I rather be controlling Kovo myself. If this had a jump feature or something, or if Kovo wasn’t so lazy that he could just climb the wall sometimes, then I wouldn’t have to be so precise all through the level.

An average game that has its moments. The art is interesting and strangely dark, the character is unbelievably weird, and the music doesn’t fit at all. It’s a mini game that I just didn’t feel like playing after the first few times. Try it out yourself. You might like it.