I like a clever title, and MC Development’s new game app, Removr, both hints at the gameplay and is a clever illustration of the full word. Much like Tiki Totems and other games of the same cloth, Removr is a game where you must take out some objects while keeping others on screen or intact. The aspect that makes Removr different is that the accelerometer in also in play the entire time.

There are three different types of shapes in three different colors: circles, squares, and rectangles and red, blue, and green, respectively. All red pieces must be removed from the screen in order to pass the level, while the green ones need to stay on-screen. Blue pieces can be removed if necessary, but their presence is also welcome. You can tap to remove any of the square pieces (and yes, that includes rectangles), but the circles are mostly just affected by the accelerometer. For instance, tilting the device to the left will cause the circles to roll in that direction (remember, you’re playing this game in the sky, so flying upwards is also allowed!). If any of the green pieces disappear, you’ll need to restart the level, of which there are over 60 of. 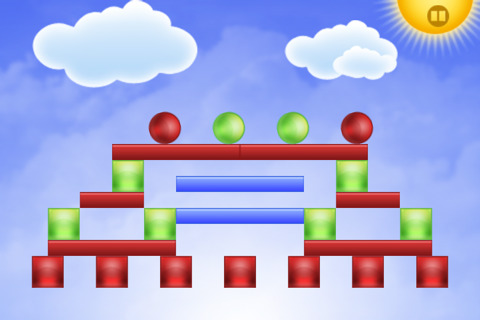 Removr has very simple rules, but depending on the configuration of the shapes, can also be tough to solve, especially when you advance to later levels. It is a bit obvious that this is a very new game, as graphics, background music, and gameplay are all pretty basic. The only new thing on the table is the fact the full-time accelerometer use, where other games might utilize it only during some parts of the game. The physics of the game are quite nicely done, however, and add a little extra oomph to what would be a boring app otherwise. I found the levels to be over and done with quickly, which is nice if you’re looking for something that’ll take up virtually only minutes of your time, but users who love to be involved in their games would probably be dissatisfied. The developers promise more levels and extra content in updates, which are much needed. Removr is an okay game for $0.99, but you could probably do better elsewhere with your dollar.