Picture this: a strangely adorable alien world in peril, threatened by an ancient cosmic evil. The only thing standing between the planet and the relentlessly destructive waves of asteroids? Just you and your trusty index finger. It’s Hand of God time, baby!

Okay, so maybe it’s not quite as biblical as that, but trust me when I say Orbital Bombardment will make you feel pretty damn powerful when you go and smash mountains of boulders out the sky. Gameplay is supremely simple and satisfying, but the challenge of the game ramps up fairly quickly. Just remember, it’s not always easy being a planetary protector.

Each level has massive waves of asteroids plummeting towards the planet’s surface, where a small crowd of helpless aliens cower. Suffice to say, it’s bad if they get hit, so you must protect them. To do that, just tap the asteroids to destroy them, and some need more than one tap before they go boom.

Later levels introduce more complicated projectiles, like hard-shelled ones where you must tear them open with a two-fingered pinch to expose their vulnerable innards. There are also numerous powerups to collect, each with a different special effect, like creating a black hole to suck in all nearby asteroids.

At the end of each level is a super-powered boss whose defenses you must gradually chip away at before you can deliver the final death blow. Boss battles are generally much more challenging and relentless than the rest of the level and usually require a lot of frantic multi-finger tapping and flailing. 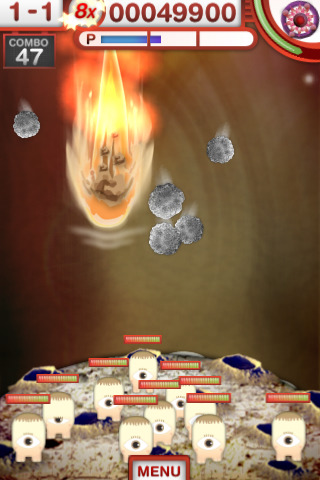 Although the aesthetic feel is nothing alike, the overall gameplay mechanic feels a lot like Space Invaders meets Bubble Wrap. Each wave is so numerous, you’re left tapping frantically the entire time. It can be somewhat exhausting, but also terrific for working out frustration. In general, I was quite pleased with the response rate of the controls, although with so much tapping going on, it was hard to determine when the controls were being fussy or I was just too clumsy to keep up.

Visually, the game is quite stunning, featuring beautifully smooth animations and nice particle effects, and the music isn’t even all that bad. It also showcases a fair amount of charm and creativity in the alien designs, although the asteroids themselves aren’t especially inspired.

Overall, the game really surpassed my overall expectations by being a highly polished, thoughtful, and satisfying experience. The wonderfully simple but intense gameplay gives Orbital Bombardment a surprisingly high replay value and makes it a worthwhile buy.