We Farm is a game app for the iPhone, iPod touch, and iPad and is created by ngmoco Inc. This is a game where you raise a farm though crops, animals, and you use this to build a bigger farm, unlock more crops, and put up decorations to share with your Plus+ friends. This is a free app though you can purchase DLC items such as growth hormones for gameplay (aka: GRO).

For whatever reason, the signing up was glitched. It wouldn’t register my fingers hitting the next button unless I used both fingers and smash the screen a dozen times. It was frustrating to be unable to complete the first step just to play the game and it was repeatable each time I hit the ‘choose your avatar’ section. Sometimes even in gameplay it wouldn’t register taps. Glitches seem to plague this game. I have crops that the builder guy refuses to move to. Why? I have no clue. If you place something out of the way enough, a builder guy will actually stay at the spawn point and construct from 30 feet away. Why does the soundtrack go quiet so often? The music is always the same, so does that mean that silence is what they wanted me to hear? Why can’t they just loop the music? 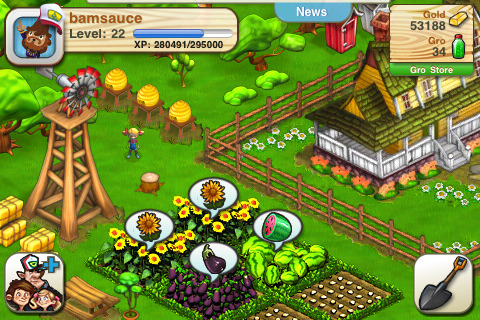 Why do I have to wait for the corn to be planted? Why do I have to wait for the coop to be built? There is nothing to pressure you, time wise, and time management doesn’t seem to have any incentive, so why should I have to wait such long periods of time to have something like this done? I suppose it’s to limit how fast the player develops. but really? You have to wait for, say for example, a chicken coop to be placed (1-2 seconds), then it has to be built (FIVE hours!), then it takes more time to make your chicken happier and more mature, which takes about 50 hours. WHY??? To promote the sale of GRO? So you make everything take tedious hours because you want to sell your growth hormones for $5 to $100!? Good lord.

Some games are to waste a couple of minutes such as an action game or short puzzle game. Others like ‘The Sims’ involve watching characters develop and grow with full customization of their homes. In We Farm, you don’t have a character that you can customize. The crops are all the same as everyone else’s games. There is a leaderboard based on your total experience points, but they are already in the billions. How are new players expected to catch up if those leaderboard champs are still playing? What is the fun in a game where you wait for crops to grow so you plant more crops? The customization of the farm itself serves only as decorations. They don’t give you benefits like faster crop growing time or make more money per sale. They are just pointless money pits that you work so hard to buy… but why?

You know, I’ve played games like Harvest Moon and Restaurant City, Farmville, and many other Facebook applications. They have different things to distract you. You know… marriage, facebook networking, etc… heck, you can even say that controlling a player directly is more engaging since you start feeling like you can connect to someone and care if their farm is small and lame or not. In this, there is a fat farmer who stands there. Seriously, does he do ANYTHING? I am the one growing crops and petting his ducks. What is this guy doing? 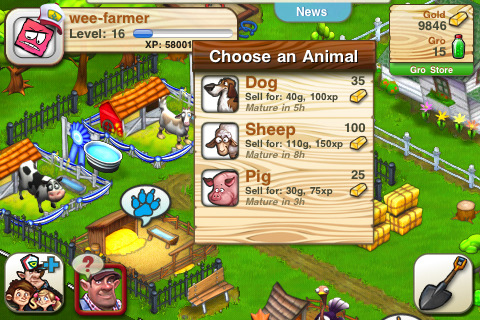 Besides the fact that I just don’t get it, the game still functions. The crops grow, the buildings get built, and the friends-adding system is functioning. The graphics are beautiful. Some of the little pet animals are cute and appealing in their own way, but overall I feel there is no incentive. The Sims gave me a huge happiness bonus if I bought that really expensive painting or athletic bonus if I purchased that awesome treadmill. This game makes me wait HOURS sometimes just to progress through the game. I was under the impression that speed and efficiency required an incentive. I felt nothing like that. No motivation to see the ‘story’ progress (no story), there was no ultimate joy in upgrading (your farm gets bigger and you plant more crops… yay…), and I felt like the only reason to decorate is to have a friend come and say “Hey, nice job.” If I wanted that, I could just decorate my room then call people over.

This app is good for fans of fish-tank decorating games and those of you who understand why games like these are appealing. I am not a fan of this game, because it picks on a person’s patience and ADHD to sell in-game growth hormones. And that last statement sounds bad because it is bad. Gardening is relaxing in real life. My iPhone is not where I want to garden fake crops and buy fake steroids for my fake corn. I get enough of that in the super markets.

I know it’s a free app, but to compete with the thousands of really good free apps out there We Farm should add some incentive into buying the currently useless decorations. That’s how you entice people into paying 20k gold for some Water Sprayer that serves no explained purpose.