Greetings, puny mortal! It is I, God. No, not that one. I am but one of many overlooked deities running around protecting hapless RPG heroes. You know the type? Rippling muscles, mysterious destiny, dumb as a box of rocks? Sure, they can kill armies of monsters, but they couldn’t find the dirty armor hamper if their lives depended on it. Heroes need an absurd amount of divine looking after, and that’s where you and Godville come in.

Godville is…well, it’s not a game, exactly, since you don’t exactly play so much as, er, supervise. You start off creating your very own hero (because that’s what we gods do), and then you set him (or her) on the path to epic greatness. He or she goes around saving hapless peasants and slaying monsters, while you issue divine guidance every step of the way. Sort of.

You see, unfortunately, us gods live kinda far away, and we don’t get as much influence as you might think. We’re mostly limited to slinging a couple of lightning bolts or healing spells every once in awhile. Divine commands take awhile to reach the mortal plain, and the heroes aren’t always so good at taking direction, so really what we end up doing most of the time is watching, and occasionally swearing when our heroes do something characteristically stupid.

Thankfully, every hero keeps a detailed diary, so they’re relatively easy to keep tabs on, and you can try to slip in your divine presence whenever it will be the most influential. Depending on your mood, you can either be a benevolent god, handy with a healing spell, or an black-hearted fiend who likes to indiscriminately lob thunderbolts at the hero and his enemies. As you might imagine, this might affect whether your hero turns out good or evil, but I won’t judge. 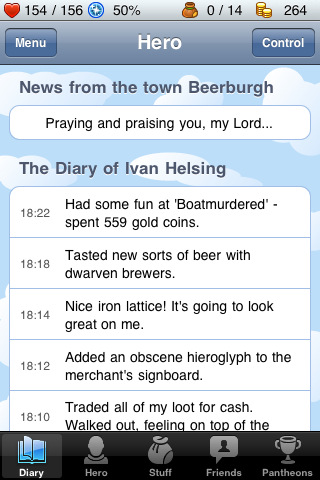 Slaughter enough monsters and complete enough quests, and your hero may even manage to join a sweet guild and meet up with other heroes. Your hero will still be a moron, sadly, and he or she is likely to get swindled by merchants or blow all their cash on stupid gear on occasion, but it all evens out in the end.

In a lot of ways, it’s a lot like being a hero yourself, only without any of the tedious grind or difficult battles. You just have to keep an eye on your pet hero and keep them from getting squashed like a bug every once in awhile. Your hero does keep going even when you’re not paying attention, so you have to show an occasional interest if you’re going to be a successful god.

You might think Godville is kinda stupid and pointless, and you’d be right, but that’s sort of the point. Nobody ever said being a god was glamorous, but watching big dumb heroes crash around the landscape can be entertaining, even with the occasional translation hiccup, and overall, it’s a cheap (as in free) thrill, so what are you waiting for?