Traffic Flow is a release from Atrophy Studios, a game based on the flow of traffic. The basic gameplay of this app is touch intersections to change red lights to green, fix the road, and try to rack up a high score based on how many cars pass the intersection safely. High scores are kept by the Plus+ system.

I was surprised how easy it was to understand this game once you actually play it. The first thing to mention is that the sound track is funky. It has a nice beat to it and the title “Traffic Flow” has some groovy, less serious presentation. You are given 2 gameplay options at the menu screen.

Flow is concentrating on keeping the traffic flowing properly, make sure no cars are destroyed, cleaning up the road if they are, and ensuring that emergency vehicles can pass through. This is the meat and potatoes of the game and it really works. You’ll start picking up on patterns that the cars usually make, and you can use that to really improve your score.

Crash is the “Burn-Out” mode for this game, and my personal favorite. You literally toss a car with your finger into traffic and try to hit as many as possible. Cars will take the hit relatively realistically so don’t expect them to bounce off walls and explode. This was really fun; especially when I realized that the harder I dragged (threw) the car, the harder it would smash into the cars, allowing me to get higher scores.

Both modes involve unlocking new levels by buying them with your points. Each time you play a Flow or Crash game, your high score determines how much money you have to unlock new levels. This system makes you replay levels and learn how to get through them efficiently. This is a really effective way to teach me the gameplay and allow me to determine when I was ready for the next gameplay challenge. 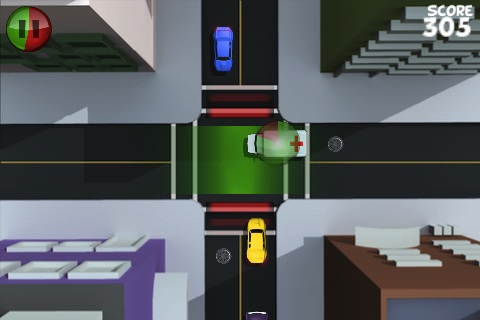 The art is very good. It’s the old GTA, top-down camera that views the world from, I suppose, God’s point of view. You are the traffic god and the cars are tiny ants you can play with!… anyways, yeah, the cars are drawn well, the effects of the water, ambulances, and the little smoke effect of the crashed cars are nice and well done.

The real annoyance I had was actually in the score tallying screen after you finish a level. The numbers will climb up very slowly. You can’t speed them up by tapping the screen and there are no options to instantly read the numbers. Sometimes, I don’t want to know that the app can count, I want to know my score and move on. I sometimes end up just going back to the menu or playing again without waiting for the numbers to fully process. I think of it as a flaw, but it’s not a deal breaker.

This is a great little app with a unique idea that they executed extremely well. A number counting issue is not a gameplay issue, more of a “Please change this” kind of request more than anything. The graphics, the controls, the sound, the look and feel, and the replay value of this game make this a well done and fun game. Do me a favor and try out Crash mode. It’s wickedly therapeutic.

By speeding up the score tallying screen, we can play more levels faster and repeat the ‘good parts’ at the pace we want while also knowing how much we scored so we can improve. It’s just one tiny flaw in a very lovely and strangely addicting game. Good job Atrophy Studios.