Puff Puff is an app for the iPhone or iPod touch, and was released by 6th Mega, LLC and costs $0.99 with 10% of the proceeds going towards ecosystem restoration. This is an interesting game with an interesting concept and bright and really well done art. The music is nice and synthesized and the details to the water, with the light coming through the water, is excellently done.

Controls involve ‘zooming in’ with your fingers to make the fish expand or ‘zooming out’ to deflate your little puffer fish. You can’t control the fish directly so making it move up and down has some serious delays and can be difficult to adjust to early in the game. Over time, however, you’ll adjust to the controls and the obstacles that will come your way.

There are powerups besides just eating Urchins. You can get speed boosts and shield power ups and you can slam into sharks and knock them out… somehow. This puffer fish can kill sharks in one hit if the puffer is inflated.

I ran into some glitches like after dying for the 3rd or 4th time, with the last time being right after I collected a Speed Boost power up, my fish would suddenly start swimming faster than the camera. When the fish moved off screen, obstacles and enemies no longer spawned and I ended up breaking the game. Fun. 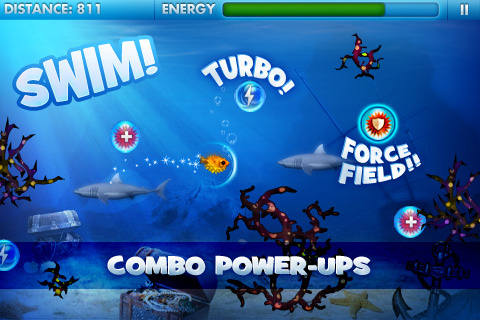 To most people, a puffer fish is just aquarium attractions and super deadly Japanese cuisine. This game is made to bring awareness to Oil Spill clean up efforts and spread information about the “Sixth Extinction” which is apparently the theory that due to human behavior and other factors relating to us, every 20 minutes we lose an animal species. It works well enough when you don’t run into the odd glitch. Puff Puff is a really great title however, so it gets extra points for the fun theme.

Not a lot to the gameplay but has a really unique look and theme. Good for charities, so I guess you should just try it so you can see for yourself. Because you know, everyone should punch a shark with a puffer fish at least once in their lives.