I just realized Sheep take a lot of abuse don’t they? In one of my first reviews, I watched as a sheep got strapped to a rocket and launched into traffic. Here, I bounce sheep off trampolines into bombs, and collecting coins while they ricochet all over the place. This is a ‘Break-Out’ style app for the iPhone, iPod touch, and iPad, and is released by Skiproach Studio for $0.99 (8/9/2010). There is a Lite version of this game available as well.

The game is simple, if not a tad cruel. You move a trampoline on wheels using your fingers by pressing either the left or right sides of the screen. That’s right, no tilting, no gimmicks, just touch one side or the other to move the trampoline. The sheep spawns in mid air and you bounce it into coins, walls, a tree that acts as a ceiling, and try to collect coins while avoiding bombs. 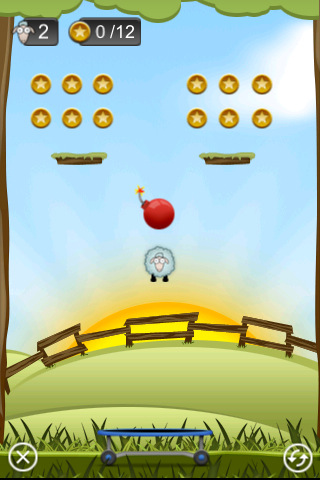 The art is nice and the simple style really adds a lot to the game’s look and feel. The surprised little sheep that bounces has tiny black feet that poke out of its wool on bounces and the background is nicely done; simple yet pretty. I do feel that the two hills in the background of the first world could use more flair, but the city and sandbox worlds are great.

My all-time favorite part of this app is the title screen music, played by bounce noises and sheep ‘bah’s. It’s awesome and fun. In game however, there is usually only the sounds of nature… boring boring nature. Some more background music during gameplay would be great.

The game itself has dozens of different levels with very different strategies in each one. Some will introduce extra sheep, others can bring out multiple trampolines. There are bombs, walls, and unique coin placements on each level and there are about 72 levels as of version 1.0. That’s just amazing.

The game is simple, the art is silly, and watching a sheep spin like crazy while bouncing into bombs is so very cruel, yet entertaining. This is a nice distraction from long trips and honestly, sheep doing anything involving explosives just smells of gold and well-done sheep.

This 3rd Party App is available at the Apple iTunes AppStore. Browse the full list of all AppStore apps filed under the AppStore category.
Download Sheep on Trampolines at iTunes App Store
Price: $0.99
Developer: Skiproach Studio
AppSafari review of Sheep on Trampolines was written by Joseph Ho on August 9th, 2010 and categorized under App Store, Games, Physics Based, Universal. Page viewed 4557 times, 1 so far today. Need help on using these apps? Please read the Help Page.