“Oh, George! Whatever will we do?”

“It’s out of our hands, Helen. All we can do now is pray for the gamers to come to our aid.”

Yeah, I wouldn’t have expected for a tower defense game to take inspiration from a cheesy 50’s sci-fi flick either, but that’s what you get with Last Front: Blob Invasion. The game has a strong Attack of the Killer Tomatoes, b-movie vibe to it, with relentless hordes of blobs descending upon the post-war USA. 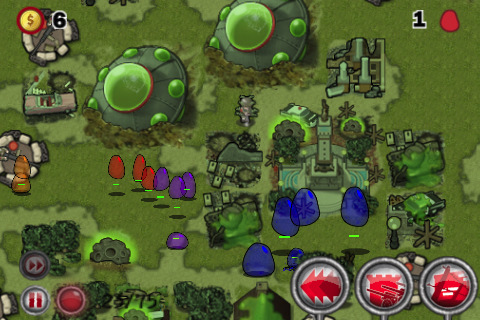 As a tower defense game, it’s an unusual take on the genre. There are four different maps, but they’re all on the very large side with a lot of room to move around in. The jelly-like blobs have multiple spawn points and move unpredictably. Planning your defense strategy requires speed, vigilance, and a fair amount of adaptability, as no two games are ever alike.

In terms of placing towers and laying down defenses, the learning curve is fairly punishing to new players. Veteran players will get the hang of it after awhile, but it’s definitely no cake walk, and while the upgrade system is functional, but it’s not particularly impressive.

In general, the game is pretty tough. It took me several tries to make any significant headway, and I’ve played plenty of tower defense games. A big part of what makes the game so challenging is the erratic movement of the blobs on the wide open maps. Blobs also frequently split in two when you shoot them, so normal strategies often fall apart.

Personally, I disliked the larger maps, primarily because I hated having to drag around to survey the action so often, but the large-format allows for greater detail and delivers a different kind of experience than the normal one screen can provide. What was more disappointing, however, was how few maps there were. I would have much preferred easier levels and more of them than the four relatively difficult ones provided.

Overall, the game is adequate, but nothing mind-blowing. The blobs themselves are so generic as enemies, it’s hard to get really excited about blowing them up, and the levels, while definitely tough, are too generic to feel particularly satisfying. It’s a game I would really only recommend to die-hard tower defense fans, but even then with some reservations.

Here is a video demo of the Last Front: Blob Invasion app on the iPhone