Promini XT is a iPhone, iPod touch, and iPad app released by T-Bone and is currently $0.99 (8/10/2010). Promini is a color matching puzzle game with explosions and scanning lasers that is all located under the sea with big chained Mines and sunken ships. You will only see two colors: Orange and Blue, and you try to set up squares that will be destroyed by the interval scanning laser that destroys the solid squares of the same color.

This is an app that heavily reminds me of Street Fighters – Puzzle Fighter, mostly because the theme is to put same-colored boxes next to each other in squares and rectangles. The scanning lasers move across the screen every couple of seconds to destroy your colored combinations. Each time those shapes are destroyed, you get money. You spend money on explosives, lightning, row destroyers, color-coated eliminators, and many others to make the game more entertaining. They usually cost a bit, but are on average very useful. 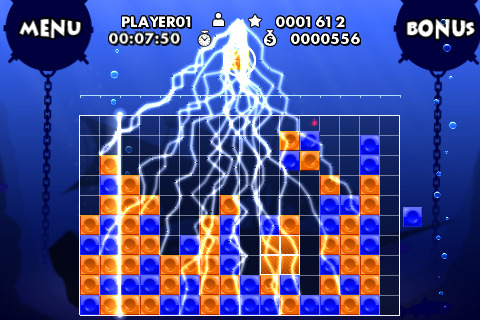 The controls are alright. You move the blocks by sliding your finger anywhere on the screen from left to right, sliding up and down rotates the block, then tapping the screen will instant-drop the blocks. You essentially have control over Tetris blocks. The main issue with this is that your finger WILL tap the screen when you really don’t want it too, usually when you are trying to rotate or move the block. This will usually result in hard to destroy, inconveniently placed blocks that interfere with your strategies. I really wished for controls on the sides of the screen in the pretty-much empty border of the game.

The sound is nice and enjoyable and after while becomes oddly calming. There are moments where if you collect enough points or something, it will change to different music. Each track is really well done. Fire tracks your finger movements, which is a nice touch, and the two-tone color set up simplifies the game to be fast and more effective. 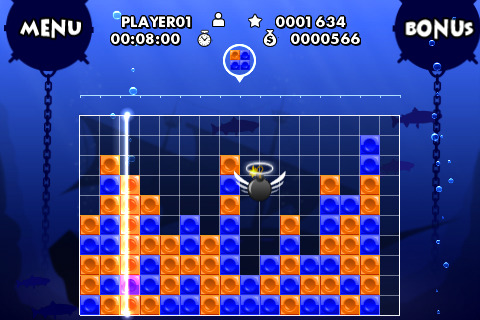 Overall, this is a perfectly functional game with a nice gameplay style. I don’t have anything to criticize this app with, so honestly, I wonder why I just don’t seem to like this one. It’s not like it’s horribly flawed, but I suppose the controls are why I didn’t like this game more. In Tetris or any other puzzle game where shapes drop downwards from the top of the screen, an instant drop could be really good for playing faster but if done by accident, it really destroys any real strategy that you could have set up. It’s a big flaw when you accidentally tap the screen and boom, you are instantly trying to clean it up rather than setting up carefully planned combinations.

Controls need a bit of a fix, but otherwise, the game works fine, looks great, sounds nice, and plays simply. The bonus items are very varied and well implemented with nice effects to each of them, and the smaller touches really make this a nice game. Controls in a puzzle game, however, are important and I’d love this game if it weren’t for the tapping. Sensitivity adjustments really didn’t help at all, just made it more difficult to move the block. In the end, I just didn’t feel any love for Promini XT, but I know for sure that puzzle gamers should really give this game a try. If you can get into the controls, you’ll love this one.