This app is a Gnome launching carnival style game where you rubber-band launch small lawn gnomes into different objects or enemies for points that you submit to Open Feint. This app is available for the iPhone, iPod touch, and iPad and was created by Movable Sprites LLC. This app costs $1.99 (8/10/2010) and is available in a Lite version.

Hoo boy, I really had no idea what to expect when I started this app up. The controls are quickly explained through a single line of text on the screen and then the game starts. The entire game looks like a carnival stand, with the cardboard cut outs and whatnot. You play by pulling a gnome back on a rubber band and launch the little fella into the cardboard cut outs. The themes of each level are all really fun to look at. You have castles under attack, you can fly into the clouds, or you could even battle against an ogre tower. The graphics are top notch and definitely has tons of polish. 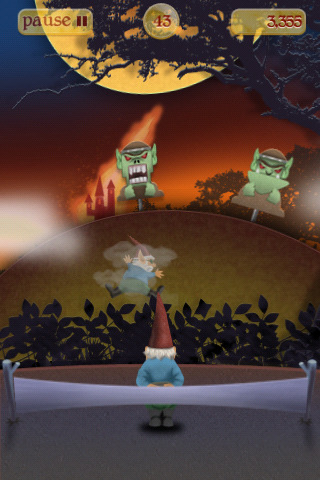 Chuck, the Gnome, have voice overs that repeat constantly as you flick the gnomes as fast as possible to land on objects. You can turn them off, however, which is super convenient. There is also a small subtle touch in which if you flick Chuck extra hard, he makes a noticeably different yell. The graphics really show their charm here. Each time you launch the gnome, you can see it splat hard against the cutouts, whether you land on a target or just smack face-first into a wall. The sense of depth and the feeling of the carnival are really well done here. This is what I wished all carnival games would play like.

I really can’t get over how nice the game looks. Early in the game, my impression of the graphics was drastically improved when I played “When Ogres Attack” and a really nicely done Disney-esk castle with rolling hills in the foreground slowly got enfulfed by ogres and fire. Fireballs can be knocked down for points and the hills start burning. After a while, the castle in the background starts burning too and the game just sold me. 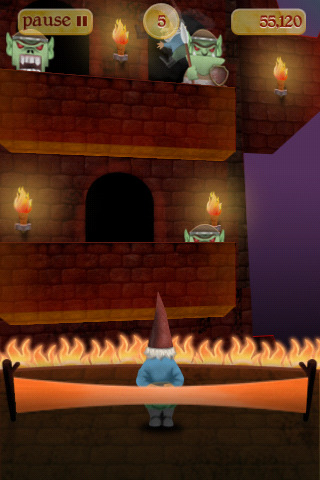 I love this one. The controls are great, the sounds are funny, and I really can’t get over how well done the art is. This is definitely a great app. CHUCK SMASH!