Simon Says is exactly what you would expect it to be: a digital version of the memory enhancing game that you played as a child. A few additions include game level options and music that sounds like Simon spends a lot of time at a European discotheque now. Personally, I’m a huge fan of his new found lifestyle; the introductory music really pumps me up for the game. I am also a fan of the noises each wedge makes when it is lit up. The act of watching it light up and hearing it chime (each color has a different pitch) combine to aid your memory in pressing the correct order of buttons. The catch is, you can’t really play this game in a crowded room full of distractions unless you have an indestructible attention span. Even with only a few people walking around me I get really frustrated and can’t pay attention, but this might only be a problem specific to me. 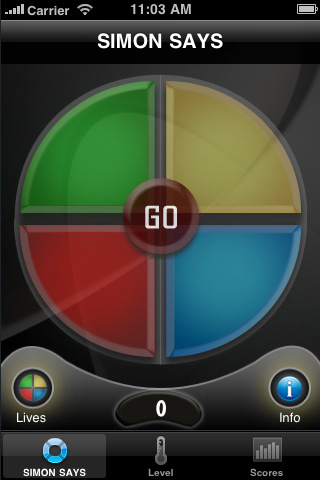 Putting my own handicaps aside, I was really impressed with the quality and graphics of this game. It is colorful, easy to use, and visually appealing. Its simplicity really enhances its aesthetic; when you’re trying to memorize a pattern or button sequence, the last thing you need is excessive graphics or noises popping out at you. While this game isn’t an original concept, I think its creators translated it well to its digital form. Believe me, playing it is truly habit forming–for only $0.99 cents it is quite the bargain.

I am all about updating the old and Simon Says certainly isn’t outdated. In a culture where you have so much information available at your fingertips it is useful to spend some time actually committing something to memory. I think the best part about Simon Says Classic is that it was not changed too much from it’s original format. Why fix something that isn’t broken? The original game suited its purpose well and I am thankful that this version did not stray too far from the pack. The only difference is that it is played on a flat screen, but at least it’s still played on a hand-held device. To sum it up, this game did not deviate too much from it’s original design, it is easy to use, and it won’t empty out your pockets.