Fragger is a precision-aiming grenade-tossing game where you try to blow up terrorist mummies who just stand there waiting to be exploded. This game costs $0.99 and has a free version available. This game is released by Miniclip SA for the iPhone, iPod touch, and iPad and is currently in version 1.2 (8/11/2010).

This is a really fun one. It’s been out for a while now and its popularity is well understandable. First impression, the graphics are clean and well-drawn, with sharp colorful buildings, backgrounds, characters, and little terrorists. The game is based on strength of throw and aiming in an arc. You try to kill all the terrorists with the minimal amount of grenades possible. The system is actually pretty interesting in itself. The grenade can’t be cooked and can’t explode until it comes to a complete stop from its physics based bouncing and rolling. This feels a bit limiting, but it does play to the puzzles where sometimes, exploding isn’t the point. 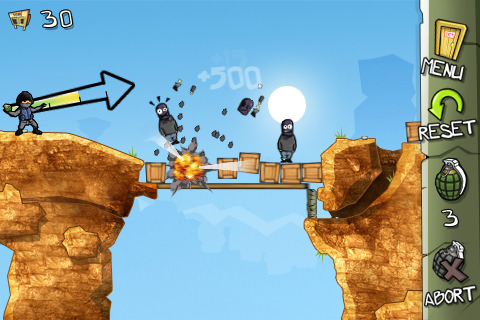 There are TONS of different levels with a huge variety of puzzle styles. It’s really quite amazing how many levels there are in each world and there are 3 worlds! I really like the less intrusive music scores and this game actually features music recognition where if you play your own music, the game will mute its own music. Nice touch.

Overall, this game features some nice mind-bending puzzles with a Counter-Strike style look and feel while also playing to the cartoony violent side of games. Be aware that there is significant violence to this game. The enemies never actually attack you so they just seem like innocent masked mummies who just stand there in the face of a frag-chucker. Sometimes, their heads will actually pop off in the explosion… and they look so scared after a while, its kind sad. 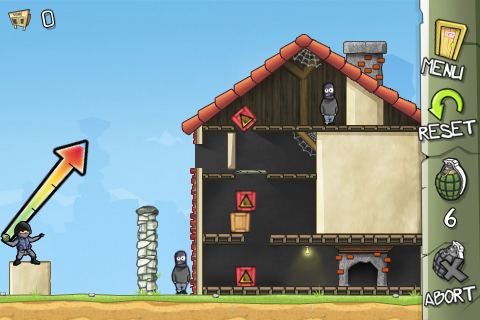 The graphics are great with my personal favorites being the desert rock since they look really good and the city buildings since they have a comic-book style cartoony look. It’s really great to look at and entertaining to play.

So if you enjoy blowing up cartoony terrorists with frag grenades while playing some gradually more complicated puzzles, then you’ll love this game. The game is entertaining but not for small children.