“Greetings, comrade! May I offer you a glass of vodka? Here, have some caviar and borscht as we sing the praises of Mother Russia! I see you admiring my hammer and sickle on the wall there. My grandfather used them to strike down villainous Nazis during the War. A great man, my grandfather. Please, allow me to tell you his story as we listen to balalaika music and watch the snow fall.”

Okay, so it’s not quite that bad, but to say that Victory Day lays the patriotism on a little thick might be a bit of an understatement. This is a little 2.5-D side-scroller even Stalin would be proud of. 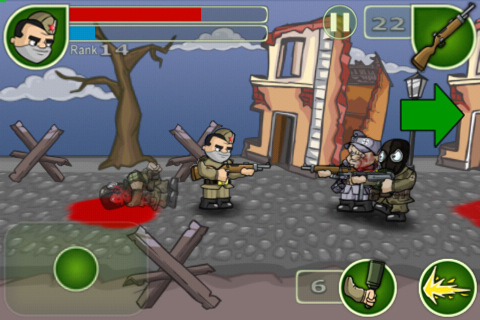 You play as a salt-of-the-earth Russian grunt who is working his way through enemy territory with only his trusty hammer to start with. Like Zombieville USA and games of its ilk, there’s not a whole lot by way of story, but there is killing and plenty of it. As you go along, you acquire new and better weapons, usually in easily identified mystery boxes. Everything from semi-automatic weapons to Molotov cocktails, the armory has got you covered. There is also plenty of health airdropped in, and you can usually swipe some extra health and ammo from your fallen enemies.

Speaking of enemies, there are lots and lots of them, evil, menacing, cartoon Nazis who want nothing more than to rend you limb from limb. The stylized character design in the game is actually pretty striking, and I appreciated the variety included, also in the various settings you wander through. 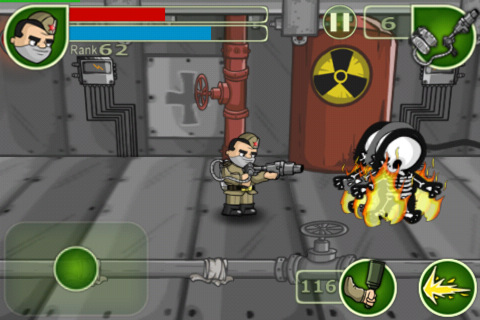 The controls are simple enough to learn, but I wasn’t in love with the response rate, and the overall difficulty level is surprisingly steep for such a simple-looking game, but by and large, it’s easy to pick up and easy to play. It does get somewhat repetitive after awhile, but that’s mostly the norm for this particular genre. You just have to accept that killing Nazis is hard work, especially if you want a crack at tackling the robot tank boss.

You have your choice between campaign and survival mode, and campaign mode has about a dozen or so levels, so there’s a reasonable amount to do here, although it doesn’t have the same amount of polish and charm as Zombieville USA. Developers have mentioned, however, the possibility of adding in an American G.I. and possibly a female character to broaden the game’s appeal a bit.

All in all, it’s not a bad little game. If you’ve got a taste for nationalistic, blood-soaked, cartoon violence, then Victory Day is a couple of bucks well spent.