I am a fairly terrible artist. When playing Pictionary, if I hold up a picture of a tree I’ve drawn, I can get guesses ranging from “a duck” to “Supreme Court Justice Sandra Day O’Connor”. I get mocked regularly for my blatant inability to make even the simplest of sketches. Suffice to say, I’m not very good at playing online Pictionary-wannabe Depict, but it’s so very fun, I don’t care…much.

I admit, it’s a little depressing when no one can guess what you’ve drawn, but Depict does a downright fantastic job of bringing Pictionary to the App Store and online. Making use of OpenFeint’s massive network, Depict matches you with other players and gets the action rolling with a simple, intuitive drawing space and easy-to-use multiple choice options for guessing. 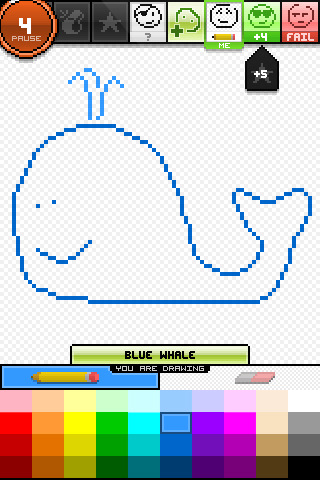 Most of the time, you’ll just be interpreting the artistic scribbles of your fellow players, and the limited response options prevent jokesters from getting snarky or crass. Speedier guessers get extra points, but you only get one guess, so be sure to make it count.

When it’s your turn to draw, just select a color and get to drawing. You don’t have a lot of time, so be quick about it. If you want to fill the background with color, just double-tap the color, and an eraser helps eliminate any unfortunate mistakes. But don’t draw anything obscene or start writing out the answers. Cheaters generally get quickly reported and their turns disqualified. 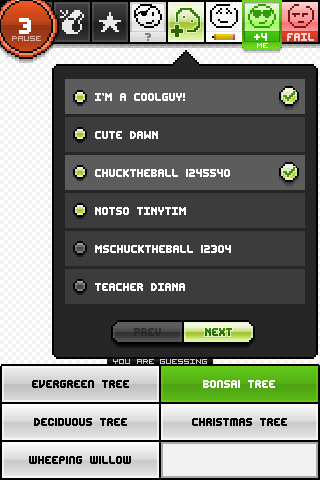 Thanks to the fantastic interface, Depict is a fun and addictive experience. Playing with strangers on the Internet in quick matches is easiest, but it is possible, although more complicated to set up matches among friends, although they will all need their own devices. You can even play solo while waiting for people to arrive in the room.

Additional features like avatar creation and a metric ton of OpenFeint achievements only makes Depict more and more replayable. There’s even a simplified chat system in place that allows you to select from a set of canned responses to congratulate or scold players as you go along. In addition to the wonderful cheat report/whistle-blower feature that prevents Depict from become a mass of cheaters and male anatomy, there’s also a option to rate especially good pictures, a digital pat on the back to your fellow players.

I’ve been playing Depict for hours now, and although it’s no longer free, $0.99 cents is a small price to pay for such an outstandingly fun game. Oh, and did I mention that it’s a Universal app? Seriously, what are you waiting for?