Meet Alucard, Vampire Puzzle Fighter…uh, wait, what? In a very strange twist in the long-running Castlevania series, our favorite half-vampire vampire hunter has taken inspiration from Puzzle Quest’s massive success and put aside his famous whip sword (thanks, Bill W.) in favor of match-3 gems.

It seems like a thoroughly odd combination for such an established franchise, but it works far better than you might imagine. This is largely because of the utter seriousness with which the developers approached the project. There is no tongue-in-cheek “ha ha, look what we did” mugging for the camera, just the straight up castle exploration and monster killing you know and love, albeit with a rather unusual combat system. Fans can relax a bit, because it actually looks and feels like a Castlevania game. 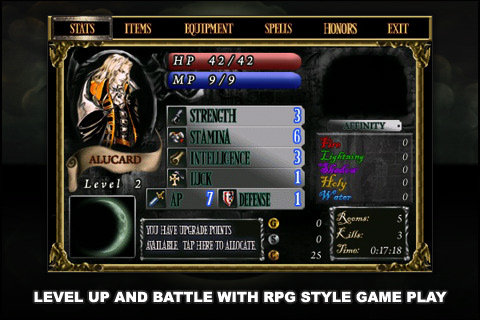 But let’s talk a bit about this controversial combat system, shall we? Unlike Puzzle Quest, this is a match-3 game of the Puzzle Fighter sort. That means a split screen, with your opponent matching gems on one side to launch attacks at you and vice versa. Rather than swapping gems to make matches, Castlevania Puzzle has them falling in pairs from the sky Tetris-style. Drag to move and tap to rotate. Some gems must be activated by matching a neighboring gem, and matches do not have to be in a straight line, which can result in massive chaining that drops loads of inactive gems onto your opponent.

It’s a system that has worked very well for Puzzle Fighter over the years, but it’s less successful here, largely due to the screen size. The playing area is downright tiny, which makes it enormously difficult to drag around the miniscule pieces. Although the battle screens look quite nice and in character with the rest of the game, the interface just isn’t responsive enough and squinting gets old after awhile. 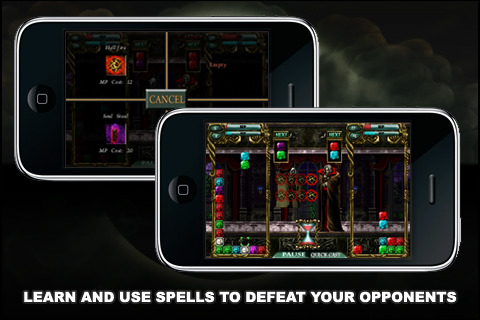 The rest of the game fares much better, thanks to some serious RPG elements. Leveling and assigning skill points are much more familiar territory for Castlevania, as is general castle exploration and loot gathering. There are dozens of items to manage, from gear to health items, but while this provides a beautifully robust RPG element, it’s a little too complicated for the average casual gaming set.

Ultimately, Castlevania Puzzle is an interesting experiment for the franchise, and one it’s entitled to after 20+ years of the same old thing, but it never quite establishes exactly what kind of game it wants to be, too involved for the casual crowd, too big a departure for the hardcore fans, and marred by awkward controls. I’ll admit, my Symphony of the Night nostalgia was working overtime throughout the game, but Castlevania Puzzler just wasn’t everything I’d hoped it would be.

Here is a video demo of the Castlevania Puzzle: Encore of the Night app on the iPhone

3 Comments to “Castlevania Puzzle: Encore of the Night”